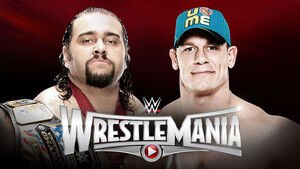 Watch a war between worlds at WrestleMania 31, as United States Champion Rusev defends his title against challenger John Cena.

The first meeting between these two warriors took place in February at WWE Fastlane, where The Super Athlete, with the aid of Lana and a low blow, retained his U.S. Championship after Cena passed out in the Accolade.

In the following weeks, Cena demanded a rematch against The Hero of the Russian Federation, only for Rusev to repeatedly deny him the opportunity to go one-on-one. Following a heated exchange with Stephanie McMahon, in which she made clear Cena would only compete at WrestleMania if Rusev conceded to a rematch, it seemed as if, for the first time in 11 years, there would be no Cena at WrestleMania. That changed on the March 9 edition of Raw, though, when the Cenation leader left Lana little choice but to accept his challenge, forcing Rusev to pass out in the STF before Lana granted Cena his long-awaited rematch.

Rusev has been on a path of destruction since making his debut last year, picking up victories over the likes of former World Champions Jack Swagger, Mark Henry and Big Show. With The Ravishing Russian by his side, Rusev was able to conquer Sheamus to win the U.S. Title, his first championship in WWE. Now, after almost one year of not being pinned or made to submit, Rusev looks to cement himself as an unstoppable force with a victory over the 15-time World Champion.

Cena has had nothing short of a legendary 13-year career in WWE, not only becoming the WWE World Heavyweight Champion 12 times, but also winning the United States Championship, as well as several tag team championships, the Royal Rumble Match and the Money in the Bank Ladder Match. In his 12th appearance on The Showcase of the Immortals, Cena looks to put down The Bulgarian Brute and reclaim the U.S. Title after 10 years of not holding the star-spangled championship.

Can Rusev defeat Cena once again? Will Cena give Rusev his first decisive loss in WWE? And what role might Lana play in this epic clash?

Retrieved from "https://prowrestling.fandom.com/wiki/WrestleMania_31_John_Cena_v_Rusev?oldid=631677"
Community content is available under CC-BY-SA unless otherwise noted.