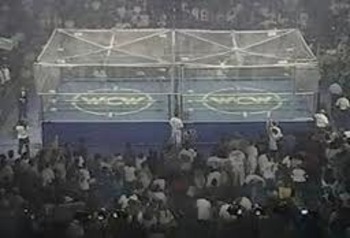 The WarGames match was a gimmick match used originally by Jim Crockett Promotions and later by World Championship Wrestling (WCW) mostly at their September Pay Per View event Fall Brawl.

Two rings, side by side, enclosed by a cage with a roof.

Two teams of 5 (shortened to 4 in later matches) face each other in which you can only win by making a member of the other team submit, (tap out or verbally submit) or surrender, (give up/quit). No pin falls, no disqualifications, no escaping the cage, no time limit. But you cannot win the match until all members of each team have entered the match.

Each team starts with 1 man in the match who fight for five minutes. After five minutes, a coin toss is held to decide which team can send their next man, gaining the advantage by making the match 2 on 1. The teams then alternate sending a man in every two minutes. The match going 2 on 2, 3 on 2, 3 on 3 etc. Once all men from each team are in the match, The Match Beyond begins where a team can then win by making a member of the other team submit, (tap out or verbally submit) or surrender, (give up/quit).

On November 18, 2017 WWE brought back the WarGames match for their NXT brand at the NXT TakeOver: WarGames event. 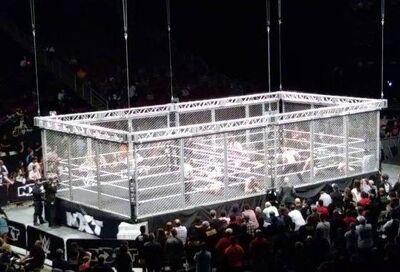 Although the match had two rings and a cage covering both rings, the cage did not have a roof.

The rules for the match were different then the original rules of the match in that instead of submit or surrender, teams could now win by pin fall or submission.

For the first NXT WarGames match on November 18, 2017 instead of 2 teams, there were three teams facing each other in the match.

The second NXT WarGames match on November 17, 2018 had 2 teams of 4 members each. Both teams were contained inside separate shark cages by the entrance way, with a member from each team (as chosen by his respective squad) starting the match. The order of entry followed the traditional order set by the first WarGames match.

Retrieved from "https://prowrestling.fandom.com/wiki/WarGames_match?oldid=1607257"
Community content is available under CC-BY-SA unless otherwise noted.