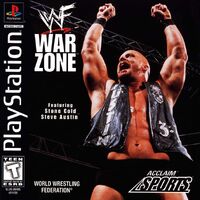 WWF War Zone is a professional wrestling video game featuring wrestlers from the World Wrestling Federation. Developed by Acclaim Studios Salt Lake and released by Acclaim Entertainment in 1998 for the PlayStation and Nintendo 64, it was the first 3D WWF title to be released and is also the first WWF title released during the company's famed The Attitude Era. The game was followed by a sequel, WWF Attitude and the game engine was used in Acclaim's ECW video game titles as well.

War Zone has many features which were unique to North American professional titles at that time. In addition to being the first 3D WWF title, the N64 version also featured high resolution 640x480 character models. The game's graphics were motion captured to reflect the unique way in which each wrestler executed his moves.

The game's momentum system is somewhat unique to the game. A character builds momentum by varying the moves he executes as well as by taunting the opponent. Repeating moves will have the crowd boo the character and give momentum to the opponent. The crowd will chant for the wrestler with maximum momentum, multiplying the damage the wrestler can do for the duration of the chant.

The game's create-a-player mode was quite popular at the time of the game's release, as it was quite extensive for a 3D game.

Each regular singles match starts with a brief intro for each wrestler appearing on top of the entrance ramp. Each wrestler has voice samples that play during each match, usually after the successful execution of a move or taunt. There are also sampled crowd chants, some of which are unique to each wrestler. Both versions feature play-by-play commentary from Jim Ross and Vince McMahon.

The PlayStation version also features full motion video with video clips of WWF events, as well as 3D interludes of the apocalyptic "War Zone" set once seen in the introduction of WWF's War Zone program. The game begins with a video intro of the player entering the "War Zone" and the main menu is an elevator with buttons that the player selects to access the various game modes.

The game's grapple system was unique at the time of the game's release. It featured punch, kick and initial grapple buttons. Grapple moves are done by performing an initial grapple and inputting a sequence of control pad presses ended by a button press. A variety of grapples moves can be done depending on the current position of the opponent.

The single player game is highlighted by the "WWF Challenge" mode - in which the player selects a character and challenges for WWF titles. The player begins on the bottom of a pyramid of television monitors with wrestler's portraits on them and works up the pyramid by winning matches against wrestlers ranked immediately above in the hierarchy. Sometimes previously defeated wrestlers will challenge the player to a "Grudge match." This is signified in the PlayStation version by a video clip of the wrestler in the War Zone issuing a challenge. These matches will usually be weapons or cage matches. If the player loses, he falls back down in ranking. As the player progresses towards the top of the pyramid, the player challenges for the Intercontinental Championship then the WWF Championship.

At certain points in the game in the PlayStation version, the player sees clips of a groupie that either expresses interest or disinterest in the player according to whether certain matches are won or lost. After earning a spot directly under the wrestler at the top, the wrestler challenges the top wrestler for the WWF Championship. By winning the game with certain characters, the player can unlock certain special features and alternate costumes.

An exhibition mode is also available for solo play, but the opponent cannot be chosen. There are a variety of match types and a maximum of four players can compete at once. There are nine modes of play in total.

1 - Bret Hart and the British Bulldog appear in the game despite leaving for WCW long before the game's release.

2 - Faarooq and The Rock are co-members of the Nation of Domination in the game and use the group's theme music.

3 - The Undertaker and Kane share some grunting sound effects, but Kane is otherwise silent during gameplay and Grudge Match video clips.

4 - Each of the three Mick Foley personas has a unique mov eset and voice samples.

5 - Shawn Michaels and Triple H are co-members of D-Generation X in the game and use the group's theme music.

6 - Without a Gameshark, it is currently unknown how Turok can be unlocked otherwise.

The two versions have various trade-offs in game features. The N64 version features high resolution character models, but no high quality digitized music and video like its PlayStation counterpart does. Also, gamers have noticed that the N64 version sports a ring canvas with an oddly yellowish hue. The N64 version has two exclusive modes; Royal Rumble and Gauntlet.

The Game Boy version of the game is a bit more limited than it's PlayStation and N64 counterparts. Modes of play include singles, tag team, cage match, and WWF Challenge (progress is kept via a password feature). Also, in this version, all wrestlers share the same move set except for their finishing moves. Finally, the Game Boy version of War Zone does not feature Bret Hart, The Headbangers, or any of the secret characters (including Cactus Jack and Dude Love).