Game Boy Color,
Nintendo 64,
PlayStation,
Dreamcast
WWF Attitude is a professional wrestling video game released by Acclaim Entertainment in 1999 for the PlayStation and Nintendo 64. A slightly enhanced port of the game was later released on the Dreamcast. Along with a handheld version for the Game Boy Color named after the slogan of WWF's marketing campaign at that time, the game's tagline is "Get it!"

The game is the sequel to Acclaim's WWF War Zone and is also the last WWF game to be published by Acclaim. Acclaim followed Attitude with two sequels based on Extreme Championship Wrestling: ECW Hardcore Revolution and ECW Anarchy Rulz.

The console versions feature a dedication to Owen Hart, who died shortly before the game's release, and was posthumously included in the roster.

Features added include a Create-A-Stable mode and a Pay-Per-View mode, which allows players to set up their own wrestling event - a series of matches, the name of the event and an arena. The game includes a customizable arena option, where a player was given full freedom to edit the color of lights, color of the ring ropes, color of the turnbuckles, logo on the side of the ring, and more.

Full WWF superstar entrances were also added, including voice overs from certain superstars that was dubbed over the music tracks. For example, Triple H does his Michael Buffer entrances. The game features an option to omit the bad language uttered by wrestlers during matches and entrances or bleep out expletives.

There were no ring announcer voices but the game did feature commentary from Jerry "The King" Lawler and Shane McMahon, who had recently taken a role as an announcer on Sunday Night Heat. McMahon takes the place of Jim Ross from the first game, who had recently been off WWF television during his bout with Bell's Palsy. Instead of the commentators talking about each of the wrestlers before the match, each wrestler, including created wrestlers, has a set of pre-match taunts.

The handheld port of the game for the Game Boy Color is slightly different from its console counterparts. There are 20 playable characters including Taka Michinoku and Sable as secret characters. This port uses passwords as a way to save your progress.

The PlayStation version features 4 different selectable costumes for each wrestler, which is exclusive to this version. The Dreamcast version features improved graphics over its PlayStation & Nintendo 64 counterparts, such as higher-resolution texture maps and more animated, less pixelated audience graphics. Otherwise, all 3 versions are identical in gameplay and features.

In Season Mode, fans could throw foreign objects into the ring. If struck the character would receive damage to their health or possibly even knocked out.

Create-A-Wrestler mode was expanded and includes the ability to create a wrestler. Though not playable in the game, The Hardy Boyz did the motion capture for the moves. Original entrance music was also added, as well as superstar nicknames that the commentators would announce and accompanying crowd chants for each name.

Nicknames used includes Crusty, Flood or Jabroni. You can also choose another name rather than the selected ones, but commentators and crowd chants would announce the wrestler as Player One, Player Two, Player Three or Player Four.

You can also choose a voice, theme song or entrance for a created wrestler, including featured and custom theme songs or voices. Attributes an also be chosen, describing the Strength, Toughness, Speed, Recovery, Charisma, and Mat Skills of the wrestler, a point of up to 10 for each ones. The point limit is 36, although 39 can be unlocked. You can also choose the moves of the wrestler.

Gameplay from WWF War Zone was for the most part retained. However, each wrestler had a set of "common moves" added, including a hammer lock and a full nelson. Two other moves of interest that all characters can use are the moveable scoop slam and the movable belly to back suplex toss. They are "movable" because the player can walk around the ring with their opponent before completing the move. This allowed the player to walk their opponent towards the ropes, perform the move and thus toss their opponent over the top rope. These moves were mainly used in the Royal Rumble match types. The ability of the player to dictate the exact timing and execution of a move has since been featured in WWE SmackDown! vs. RAW and WWE SmackDown! vs. RAW 2006 and expanded upon in WWE SmackDown! vs. Raw 2007 with the new 'Ultimate Control Moves'. Also added were a set of double-team moves for tag team matches, including a wish bone leg-splitter and a double-team powerbomb.

The previous edition's "Challenge Mode" was replaced by a Career Mode which allowed a player to wrestle as a WWF star. The player would first start wrestling on house shows winning matches to work their way up to RAW, then pay-per-view events and eventually getting title shots as the Career Mode progressed. Exhibition mode now allowed players to select specific opponents. New match types were also added.

The sequel retained most of the previous game's look and feel but did feature some slight adjustments, such as a slightly different health bar. The game also included new features that were considered innovative at the time, like the ability to "play to the crowd". The game also featured repeated move detection. By not repeatedly performing the same moves the player/CPU would be rewarded and receive an increase in attack damage.

In the Dreamcast version, blood is another feature. If turned on, wrestlers would develop large red streaks and stains on any body part which had been damaged.

Throughout the course of a match, every player can attain signature moves when a certain amount of damage is done to their opponents. Dealing additional damage allows players to perform a finishing move. For example, Stone Cold Steve Austin's signature move is the Lou Thesz press and his finishing maneuver is the Stone Cold Stunner. Unlike other wrestling games, finishing moves can be performed without the premise of a grapple.

The PSX and N64 versions of Attitude include multiple tributes to Owen Hart. One is just before the press start screen, while another is in the game's credits. The game also features the OH armbands that were worn by WWF personnel and staff after Owen's death.

The tribute shown before the title screen from the PSX and N64 versions is absent from the Dreamcast port.

Originally, both Steven Regal and Tiger Ali Singh were to be in Attitude. However, they were removed and replaced by The Big Boss Man, Christian, and The Godfather.

Additionally, early previews of the game spoke of fictional jobbers that you would face early on in the career mode. For unknown reasons, they were removed from the game. However, their voices, ring attire, and theme songs remain in the Create-a-Wrestler mode:

After the untimely death of Owen Hart, before releasing the game, Acclaim inserted a memorial screen dedicated to Hart that is seen at the beginning of the game. The memorial screen is absent in the Dreamcast version. 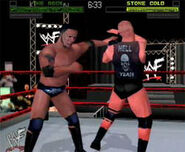