In 1991, World Championship Wrestling (WCW), another subsidiary to the NWA, established the WCW World Heavyweight Championship to complement the NWA's world title. WCW then seceded from the NWA and grew to become a rival promotion to the WWF. Both organizations grew into mainstream prominence and were eventually involved in a television ratings war, dubbed the Monday Night Wars. Near the end of the ratings war, WCW began a financial decline, which culminated in March 2001 with the WWF's purchase of WCW. As a result of the purchase, the WWF acquired the video library of WCW, select talent contracts, and championships among other assets. The slew of former WCW talent joining the WWF roster began "The Invasion" which effectively phased out the WCW name. Following this, the WCW Championship was unified with the WWF Championship, at Vengeance 2001 in December. At the event, Chris Jericho defeated The Rock and Stone Cold Steve Austin to win the WCW Championship and WWF Championship respectively. Consequently, Chris Jericho was named the final WCW Champion and the subsequent Undisputed Champion as the WWF Championship became the Undisputed Championship in professional wrestling with no other prominent world heavyweight title to dispute the recognition. 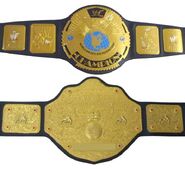