Wii
Xbox 360
PS3
PS2
PSP
WWE SmackDown vs. Raw 2011 (also shortened to WWE SvR 2011) is a professional wrestling video game developed by Yuke's and published by THQ for the PlayStation 2 (PS2), PlayStation (PS3), PlayStation Portable (PSP), Wii and Xbox 360 systems. It is part of the long-running WWE SmackDown vs. Raw series and was released on October 26, 2010. The game is based on the two brands of World Wrestling Entertainment (WWE), Raw and SmackDown.

One of the main changes in the game is the incorporation of a new physics system that allows objects to be used more realistically, such as objects involved in the Tables, Ladders, and Chairs match. Tables will now break differently depending on the impact placed upon them. Inside and outside the ring, ladders can now be rested onto the ring ropes and be broken into pieces. For the first time since the original WWE SmackDown! vs. RAW game, chairs can be thrown at the player's opponents.

The Hell in a Cell match was revamped with expanded cell walls, weapons underneath the ring, steel steps near the poles, and the removal of the cell door. In addition, new ways to exit the cell will be introduced, such as barreling through the cage wall when the player has a finisher stored.

For the first time since WWE SmackDown! Shut Your Mouth, the player can roam freely around the backstage areas in the game's primary story mode, though the ability to roam during matches has not returned to the series. Moves and controls are modified to incorporate new options to perform during and after a move is executed. The strong grapple modifier has been revamped to allow the player to perform more powerful moves on the opponent as the player progresses into the match and wears down the opponent. There are new announce tables moves like a moonsault from the ring to the prone opponent.

The game's new "WWE Universe" mode replaces the career mode from previous games. The mode builds storylines, and integrates cut scenes and rivalries between wrestlers based on the matches that are wrestled.

Road to WrestleMania mode has been modified to include new features such as backstage roaming, mini-quests, and further interaction with other Superstars. Playable storylines involve Rey Mysterio, John Cena, Christian, and Chris Jericho. Along with that is the new storyline in which players choose Kofi Kingston, John Morrison, Dolph Ziggler, R-Truth, or a created superstar in a quest to end The Undertaker's undefeated streak. Create A Superstar mode now includes pre-loaded attribute points for a created superstars, while in Create A Finisher mode, attributes such as speed and trajectory can now be modified by single increments rather than 25% increments. The number of available created finishers has been expanded to 130 as well. Online mode also returns - each new copy of the game contains an Online Pass allowing one user to play the game online for free. Players who rent or purchase the game will obtain a trial of Online Pass.

A new feature called "Match Creator" allows players to create new match types. In addition, Story Designer mode now has new cutscenes, usable sound clips from announcers and wrestler entrance music, support for up to 15 created superstars, the ability to include championship belts in cutscenes and event triggers based on a wrestler reaching a certain state.

WWE SmackDown vs. Raw 2011 was first announced along WWE All Stars at E3 in June 2010 by THQ. A playable demo was featured at E3 with Randy Orton, The Undertaker, Chris Jericho and The Miz as playable characters.

Special editions of the game featuring The Undertaker, Bret Hart and Randy Orton will be released, each offering exclusive in-game content, an art book and DVD relating to each wrestler. Various retailers have offered in-game bonuses to those who pre-order the game including a playable Bret Hart, The Undertaker's alternate Ministry of Darkness attire, three alternate outfits for Randy Orton and the WWE Tribute to the Troops arena. 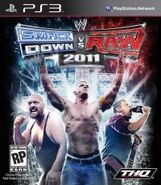 Canadian Cover
Add a photo to this gallery

Retrieved from "https://prowrestling.fandom.com/wiki/WWE_SmackDown_vs._Raw_2011?oldid=1793122"
Community content is available under CC-BY-SA unless otherwise noted.