The event has been held only in indoor arenas in the United States (the first two events have both taken place at the Allstate Arena, in Rosemont, Illinois). Championship bouts are scheduled on every card, with the lower-tier titles featured on the undercard and the top-tier featured on the main card.

Payback 2017
Add a photo to this gallery 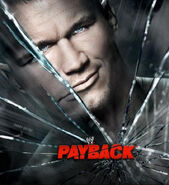 One of the many WWE Payback logos.
Add a photo to this gallery

Retrieved from "https://prowrestling.fandom.com/wiki/WWE_Payback?oldid=1342839"
Community content is available under CC-BY-SA unless otherwise noted.