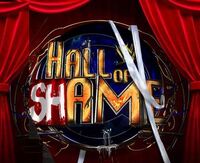 In professional wrestling, the WWE Hall of Shame was an institution that dishonors selected employees of World Wrestling Entertainment (formerly other figures who have contributed to wrestling and sports-entertainment in general.)

Main article: List of members of the WWE Hall of Shame

Retrieved from "https://prowrestling.fandom.com/wiki/WWE_Hall_of_Shame?oldid=1507077"
Community content is available under CC-BY-SA unless otherwise noted.