The WWE Diva Search was a talent competition held by World Wrestling Entertainment (WWE) which ran from 2003 until 2007. The aim of the contest was to find the newest WWE Diva to add to the WWE roster. The first winner was Jaime Koeppe, but she did not receive a contract like subsequent winners of the contest. Other winners included Christy Hemme, Ashley Massaro, Layla El, and the final winner Eve Torres. In addition to the winners of the yearly contest, WWE has hired several contestants as Divas.

Theme: "Be Yourself" by Audioslave

Themes: "Move Along" by The All-American Rejects, "Face Down" by The Red Jumpsuit Apparatus, and "Out Here All Night" by Damone 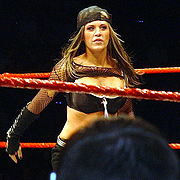 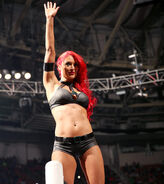 Eva Marie - Winner of the 2013 Diva Search
Add a photo to this gallery
Retrieved from "https://prowrestling.fandom.com/wiki/WWE_Diva_Search?oldid=1551030"
Community content is available under CC-BY-SA unless otherwise noted.