Eight years ago, a 14-year-old Noam Dar first crossed paths with Zack Sabre Jr. in a training garage in his home country of Scotland. Since then, the two have been close friends. Their history went out the window this week, however, as they locked horns in the Quarterfinals of the inaugural WWE Cruiserweight Classic.

Dar wasted no time in going after his friend, but soon found himself at the mercy of The Technical Wizard. Sabre Jr. took control of The Scottish Supernova, locking on a straitjacket hold until Dar forced a break and elbowed his friend in the corner. Dar played some mind games with Sabre, which frustrated the Englishman and allowed Dar to work over his peer's left leg, weakening it for his trademark kneebar.

Sabre responded in kind, targeting Dar's arm with brutal stomps and submissions. Despite the attack, Dar hung hold for hold with his friend, continuing his attack on Sabre's leg. The Scottish Supernova was persistent and succeeded in locking on the kneebar, though Sabre did not tap out. Instead, the two rolled out of the ring while still in the hold, a move that left Sabre grabbing his left arm in pain.

Despite Dar ruthlessly attacking his arm and leg, Sabre again showed off his counter-wrestling ability. He caught Dar in mid-air, then used his legs to trap the arms of the Scot and bend them back at a disgusting degree, leaving Dar no choice but to give up. With the victory, Zack Sabre Jr. advances to next week's live finale, where he will face Gran Metalik in the Semifinals.

The last Quarterfinal Match also saw two friends square off, with Rich Swann facing T.J. Perkins for a spot in the CWC Semifinals. Neither man was afraid to show off their flashier side, with Swann dancing as the WWE Universe cheered him on, while Perkins chose to dab as he locked Swann in a headscissors.

Though the mood of the bout was light early on, the tide turned quickly after TJP applied his kneebar in lightning-quick fashion. The speed of the bout picked up from there, as Swann attempted to moonsault onto his friend at ringside, only to jam his leg on the landing and leave himself vulnerable to a springboard dropkick from “The Fil-Am Flash.”

Perkins landed badly on the ring apron, but it didn't seem to slow him down as he pounced on Swann, focusing his attack his friend's left leg. The 18-year veteran slowed the bout down to a methodical pace, but Swann fought through the pain and pressed forward. However, the leg injury hampered the Baltimore native's uncanny jumping ability, preventing him from getting maximum air.

Swann dug down deep and managed to hit a jumping hurricanrana to remove TJP from the top rope, but the move seemed to cost him – the high-flyer continued to take to the air, but he winced with every landing. When Swann went for his Standing 450 Splash, Perkins caught him after the first jump and locked on the TJP Clutch. Swann was able to reach the ropes, but would not be able to withstand the pain a second time, tapping out to give Perkins the victory.

A somewhat remorseful Perkins released the hold immediately and checked on his friend, but he had plenty of reason to celebrate as he cemented his place in the CWC's final four. 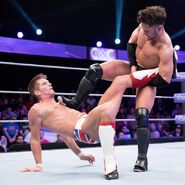 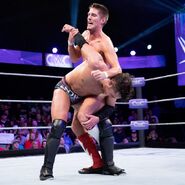 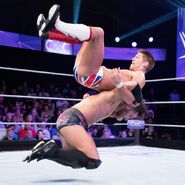 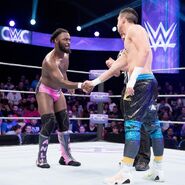 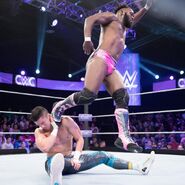 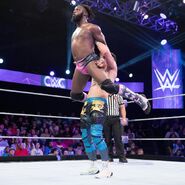 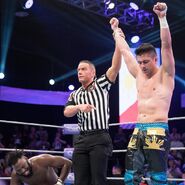 Retrieved from "https://prowrestling.fandom.com/wiki/WWE_Cruiserweight_Classic_2016_(September_7,_2016)?oldid=1573249"
Community content is available under CC-BY-SA unless otherwise noted.