The first round of the inaugural WWE Cruiserweight Classic continued this week, kicking off with the return of Tajiri. After a decade away from WWE, The Japanese Buzzsaw is back with a vengeance, which Damian Slater learned quickly in their battle.

Slater calls himself “World-Beater,” as he thrives in being the underdog, which he certainly was against the former three-time Cruiserweight Champion. The Australian tried to take control of the match early on, but found himself on the receiving ends of Tajiri's devastating kicks. Slater did all he could to slow down Tajiri, including a breathtaking corkscrew pescado to the arena floor. In the end, however, Tajiri ensnared Slater in the Tarantula before clobbering the Australian with the Buzzsaw Kick to cement his place in the second round of the CWC, where he will face Gran Metalik.

There was plenty of charisma on display in this battle, as flashy Filipino flyer T.J. Perkins clashed with the breakdancing “Urban German,” Da Mack. Perkins, a versatile 18-year veteran of the ring, demonstrated his technical ability just after the opening bell, rapidly taking Da Mack to the canvas. Mack tried his best to escape a head-scissors applied by his rival, but TJP kept the hold locked on tight, and dabbed on Da Mack for good measure.

The “Urban German” eventually matched speed with Perkins and slowed his rival down with a dropkick, then got in a few dancing chops of his own. Da Mack caught Perkins on the ring apron, slamming him down to the arena floor before following up with a highlight reel-worthy dive and a huge dropkick that nearly got the three-count.

However, the veteran Perkins had one too many tricks up his sleeve for Da Mack to counter. After tossing Da Mack out from a fireman's carry into a vicious head kick, TJP locked on a flying kneebar in the middle of the ring, leaving Da Mack no choice but to tap out. With the victory, Perkins moves on to the sweet 16, where he will meet the winner of the upcoming battle between Johnny Gargano and Tommaso Ciampa.

They may not have been the most internationally recognized competitors heading into the tournament, but Lince Dorado and Mustafa Ali's names were on the minds of the WWE Universe following their absolutely epic encounter in the Cruiserweight Classic. Though Mustafa Ali tried to keep the bout at his pace in the beginning, pouncing on his opponent to pummel him, Dorado quickly used his lucha libre know-how to escape.

It didn't take long for the battle to take to the air, as Ali clocked Dorado with a flying knee off the ring apron, then followed up with a double-jump moonsault. The Golden Lynx turned the tide of the bout on the apron, when he sent Ali crashing to the arena floor with a flying head-scissors off the apron. A devastating reverse hurricanrana that spiked Ali on his head should have ended the bout, but the Pakistani Prince wasn't willing to exit the CWC without a fight.

Showing off his aerial ability, Ali brought the crowd to its feet with an unbelievable double-jump Spanish Fly off the top rope. Ali then went all in, attempting an imploding 450 Splash, but ate canvas when Dorado moved out of the way. Lince capitalized, climbing to the top and executing a picture-perfect Shooting Star Press to win a match that had Full Sail University roaring, “This is awesome!”

Kenneth Johnson may be the most determined competitor in the Cruiserweight Classic. To break into the ring game, he moved from his home in Detroit to Atlanta to train with Mr. Hughes. He then headed to San Antonio, where he swept theater floors before walking across town to sharpen his skills with former Cruiserweight Champion Funaki. Then, after attending a WWE tryout and realizing a speech impediment might hinder his chances of making it, Johnson worked and worked, eventually being able to speak for minutes at a time without a single stutter.

Yet, for all his hard work and determination, Johnson found himself standing across the ring from an absolute prodigy in Akira Tozawa. The Japanese dynamo, a graduate of the Dragon Gate dojo, is one of the CWC's quickest competitors. However, despite being in the ring against someone whose full-time career is wrestling, Johnson hung hold-for-hold with the world-travelled Tozawa.

Tozawa seemed to be equally parts frustrated and inspired by Johnson's resolution, challenging the Detroit native to a chop exchangebefore eventually catching Johnson off-guard with a hard right hand to the jaw. Tozawa stayed on top of the determined Motor City competitor, but Johnson fought on, eventually hitting the Done Deal. Yet, even that wasn't enough to put Tozawa away.

Johnson attempted to connect with a Phoenix Splash off the second ropes, but Tozawa evaded and caught Johnson with a lightning-quick German Suplex, then a deadlift bridging German Suplex to win the battle and advance in the CWC. 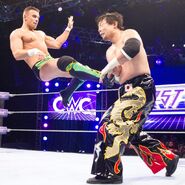 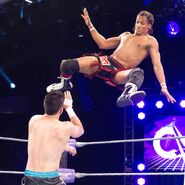 Retrieved from "https://prowrestling.fandom.com/wiki/WWE_Cruiserweight_Classic_2016_(July_20,_2016)?oldid=1573246"
Community content is available under CC-BY-SA unless otherwise noted.