Jason Lee wowed the WWE Universe with his nunchaku skills at the start of this week's edition of Cruiserweight Classic, but Rich Swann's infectious entrance music had the entire arena asking the Hong Kong, China, native one question before he locked up with the fun-loving Baltimore native: Can you handle this?

Lee appeared to able to keep up with Swann in the early moments of the match, until the NXT Superstar flipped through a lucha libre-style exchange and connected with a big dropkick. Lee quickly adjusted his gameplan, trapping Swann in the corner and unleashing a flurry of devastating strikes. Swann recovered and caught Lee on the ropes, jumping from the mat to catch his rival with a hurricanrana. The speedy Lee tried to go back to striking, but Swann countered with a roundhouse kick of his own. The strike left Lee in perfect position for Swann to show off his uncanny highflying skill and pick up the victory with an unbelievable Standing 450⁰ Splash. The win ensures that Swann's dance party continues on to the Second Round, where he will take on Lince Dorado.

Though Scotland's Noam Dar is the youngest competitor in the CWC, it does not mean he's inexperienced. The 22-year-old has become one of the most accomplished technicians on the British independent scene since entering the ring at 15, and he showed why in the early moments of his match with Gurv Sihra. “The Golden Lion” took a different approach to the match, catching his opponent with an elbow, then taunting the fiery Dar into charging at him, giving him an opening to take Dar down to the mat.

Despite being at the mercy of Sihra, Dar did not give in, waiting for his opening to attack. The Scottish submission expert focused his attack on the leg of “The Golden Lion.” Sihra nearly turned the tide with an elbow off the ropes, but Dar evaded. It wasn't long after that Dar locked on his trademark kneebar in the middle of the ring to get the submission. The victory sees Dar move onto the Second Round and a matchup with Hong Kong's Ho Ho Lun.

England's Jack Gallagher may have puffed his chest out a little bit when standing across from his hulking opponent, Fabian Aichner, but “The Extraordinary Gentleman” was not intimidated at all. Even though he was outweighed by 36 pounds, Gallagher went right after Aichner, taking the Italian bruiser to the canvas with incredibly unique British-style takedowns.

Aichner soon became frustrated with Gallagher's unusual offense and used the weight difference between them to his advantage, striking Gallagher and stopping him in his tracks. The Italian star muscled “The Extraordinary Gentleman” around the ring with ease, and even showed that he could take flight by hitting a double springboard moonsault from the apron back into the ring, though he only got a two-count.

The wiry Gallagher slipped out of Aichner's grasp and nearly ended the bout on the spot with a guillotine hold. Aichner powered out of the submission and flipped Gallagher into a powerbomb, but it still was not enough to put Gallagher away. A furious Aichner rained blows down onto Gallagher and went to the top rope for a Frog Splash. Gallagher moved, however, and “The Extraordinary Gentleman” recovered and backed his opponent into the corner, where Gallagher charged and threw all of his 167 pounds into a devastating dropkick that earned him the pinfall victory and a spot in the Second Round against Akira Tozawa.

The final match of the CWC's First Round was also the most anticipated, as one of NXT's hottest tag teams at the moment, Johnny Gargano & Tommaso Ciampa, squared off for the last spot in the sweet sixteen of this summer's biggest tournament. Tensions were high in the locker room, as Johnny Wrestling said he saw Ciampa as “just another guy” in the tournament, while Ciampa declared he was going into the battle with the intent to hurt his teammate.

Though the two partners and close friends seemed to be on the same wavelength early on, going hold for hold with each other, Gargano gained the early advantage on the canvas. When they got back to their feet, Ciampa took control of the bout by force, cracking his partner in the mouth with a hard elbow. Ciampa stayed on the attack, clobbering his friend with elbows, knees and chops around the arena.

Gargano got back into the match with a slingshot DDT that left Ciampa reeling. Johnny Wrestling stayed on his partner, connecting with a powerbomb and diving onto Ciampa at ringside. However, Ciampa could not be kept down, as he rocked Gargano with a knee back in the ring. The bout spilled out to the apron, where the two exchanged strikes again. Ciampa got the upper hand and stunned everyone in the arena when he dropped Gargano spine-first into the ring apron with an Air Raid Crash. Still, his resilient friend would not stay down for the three-count after the devastating move.

The normally ruthless Ciampa had the next round in his sights as he pulled down his kneepad to clock Gargano, but he hesitated to strike his friend and got caught with a superkick. “The Sicilian Psychopath” didn't make that mistake twice, picking Gargano up for the brutal powerbomb/backbreaker combination he calls Project Ciampa. Against any other competitor, on any other night, that would have been the end. However, Gargano is all heart and kicked out at the last second, stunning Ciampa.

A glassy-eyed Gargano struggled to get back to his feet as his friend chopped him over and over again. Ciampa finally pulled Johnny Wrestling to his feet, where Gargano dared him to unleash one final blow. Ciampa removed his elbow pad, but Gargano ducked and took Ciampa down to the mat. Gargano got the upperhand in the scrum, pinning Ciampa with a crucifix to win the last spot in the Second Round, where he will face T.J. Perkins.

After the bout, an emotionally devastated Ciampa initially refused to shake his partner's hand. Following some contemplation, Ciampa got back into the ring, sat down next to Gargano on the canvas and gave him a hug, showing that their friendship withstood this epic battle. 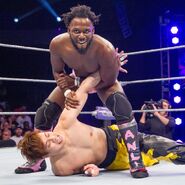 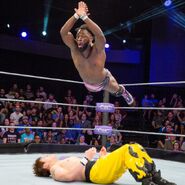 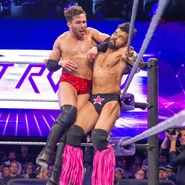 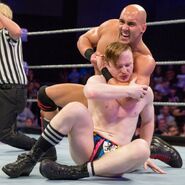 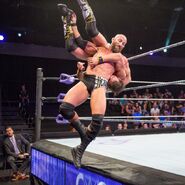 Retrieved from "https://prowrestling.fandom.com/wiki/WWE_Cruiserweight_Classic_2016_(August_3,_2016)?oldid=1573243"
Community content is available under CC-BY-SA unless otherwise noted.