WWE Bad Blood (originally Badd Blood) was a World Wrestling Entertainment professional wrestling pay-per-view event that was held in 1997, 2003, and 2004. Bad Blood 1997 was originally titled In Your House: Badd Blood and took place on October 5. In 2003 and 2004, it was an exclusive event for the Raw brand. The pay-per-view is known for introducing the Hell in a Cell match, which was the main event all three years the pay-per-view was held. In 2005, One Night Stand replaced Bad Blood when Vengeance moved to June and The Great American Bash moved to July. Bad Blood will return as a pay-per-view event for the Raw brand. 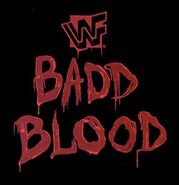 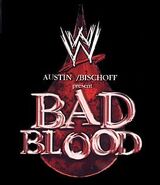 Retrieved from "https://prowrestling.fandom.com/wiki/WWE_Bad_Blood?oldid=1564527"
Community content is available under CC-BY-SA unless otherwise noted.