Xbox 360
Xbox One
PlayStation 3
PlayStation 4
WWE 2K17 is a professional wrestling video game in development by Yuke's and Visual Concepts and will be published by 2K Sports for the PlayStation 3, PlayStation 4, Xbox 360 and Xbox One. It will be the eighteenth game in the WWE games series (fourth under the "WWE 2K" banner) and will be serving as the follow up to WWE 2K16.

On May 31, 2016, WWE 2K17 was officially announced by WWE and 2K, when they revealed Goldberg as the pre-order bonus character accompanied by the debut trailer featuring Goldberg. 2K also announced that the game will include the two versions of Goldberg (WCW and WWE), along with two playable arenas (Halloween Havoc and WCW Monday Nitro). On June 27, 2016, a reveal trailer was released announcing that Brock Lesnar will be the cover star for WWE 2K17. On July 14, 2016, WWE announced an NXT Collector's Edition. The set will include Apollo Crews, Nia Jax and Shinsuke Nakamura as playable characters part of the NXT Enhancement Pack, a lithograph designed by Rob Schamberger and signed by Shinsuke Nakamura, an 8-inch collectible action figure of Demon Finn Bálor, trading cards, actual ring canvas from the NXT TakeOver: London event, 50% more points in NXT for MyCareer Mode as well as the Goldberg Pre-Order Pack.

WWE 2K17 sees the return of fighting in the crowd (which is the first time since SmackDown vs. Raw 2008, where it involves fighting into these backstage areas). It also will see the return of backstage brawls which could transition from ringside during Falls Count Anywhere or No Disqualification matches, a feature last seen in SmackDown! Here Comes the Pain. The responsiveness of the gameplay also has been greatly improved, while each game systems were updated such as ladders and taunts. The game will be introducing a new secondary submission system similar to the Breaking Point system currently seen in the last-generation versions of the WWE 2K Series.

On June 15, 2016, WWE announced that at E3 2016, the first roster reveal would be announced at 2K's booth by portrait artist Rob Schamberger. At the event, John Cena, The Ultimate Warrior and Sasha Banks were the first three names revealed. On July 26, 2016, IGN announced that The McMahon Family will be playable characters, which will include Stephanie McMahon, Shane McMahon and Vince McMahon. On August 2 to August 30, 2016, IGN will be announcing the complete roster on every Tuesday, along with in-game videos and screenshots. On August 10, the WWE 2K official site released a mini-game that consisted of spotting the announced superstars of the WWE 2K17 game on a picture of Brock Lesnar's Suplex City. The mini-game also announced that there will be 150 and more playable superstars from the past, present, and from NXT. WWE 2K17 marks the WWE video game debuts of AJ Styles, Alexa Bliss, Apollo Crews, Becky Lynch, Braun Strowman, Carmella, Chad Gable, Charlotte, Dana Brooke, Dash Wilder, Nia Jax, Jason Jordan, Sasha Banks, Scott Dawson and Shinsuke Nakamura.

On August 8, 2K revealed the official soundtrack for WWE 2K17. The soundtrack features thirteen songs from a variety of artists from various music genres, which was curated by Sean Combs (known by his stage names Puff Daddy, Puffy, Diddy and P. Diddy).

WWE 2K17's MyCareer mode introduces a promo engine, where Superstars can express themselves to the WWE Universe and also call out or respond to other WWE Superstars. Backstage interviews with Renee Young can now lead to a backstage brawl. How a player competes, reacts, what is said and even what attire is worn can make a difference in a Superstar's journey through the WWE

The WWE Universe mode now recreates real WWE Television programming as it features a new show presentation system, along with the incorporation of run-ins, as well as pre- and post-match attacks. Also introduced is a promo engine and new cutscenes. The 2K Showcase mode, which was featured in previous games, is not available in WWE 2K17. Reasons given for this include a lack of characters to license for Showcase modes, as well as a difficulty in creating a Showcase based on the cover star, Brock Lesnar.

Create a Superstar has been overhauled with more parts and adjustment options, including body hair. The Highlight Replay system is returning for the first time since WWE 2K14, which allows players to record video highlights from their matches. These can be edited in the new Create a Video feature. Create a Victory (which has not been present since WWE SmackDown! Here Comes The Pain) is also returning in the WWE 2K17. 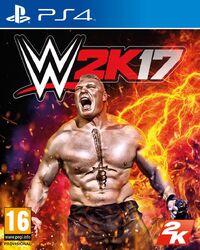