PlayStation 3
Xbox 360
Nintendo Wii
WWE '13 is a professional wrestling video game developed by Yuke's and published by THQ for the PlayStation 3, Wii and Xbox 360. It is the second game in the WWE series and the fifteenth overall in the combined series. It is the sequel to WWE '12, and was released on October 30, 2012 in North America and was released on November 2, 2012 in the United Kingdom.

The game focuses on the Attitude Era of WWE, replacing its Road to WrestleMania Mode with an Attitude Era Mode where the player plays through the Attitude Era. The game gives such characters as Stone Cold Steve Austin, The Rock and Mick Foley, as well as elements such as the Monday Night War and the Montreal Screwjob, a more important role in the game than in previous games of the series.

WWE '13 runs on the engine called, "Predator Technology 2.0", which succeeds the first version from WWE '12. The Predator Technology 2.0 game engine has been updated from the previous WWE games to allow for more fluid animations, with odd collisions and transitions having been fixed and updated, it also allows for over 300 new moves. Past problems have been fixed with a better weight detection system, contextual animations and automatic attack homing, to ensure that the character always strikes towards the opponent(s). The contextual animation system has been refined to ensure that it dynamically swaps out moves to make sure that the game is using the appropriate move animations at any given time and state. The weight detection system makes it so that small superstars such as Rey Mysterio are unable to lift larger wrestlers such as the Big Show. Thus, the contextual animations ensure that more appropriate attacks are put in the superstar's normal move set. The game's new homing system is designed that when doing high flying moves, a player will hit the intended target with better precision. The homing system also tracks tables so that they will be better detected when doing grapples on a ladder in TLC and Ladder matches.

The game is the first to feature Spectacular Moments, also known as "OMG! Moments". This feature allows for environmental moves such as ring breaks, barricade breaks, announce table breaks, and catching (mid-air) finishers to be possible. This year the development team have put much more effort into the sound aspect of the game, allowing the crowd and commentators to react to the environment, more so than previous years. Divas matches have also been updated, with up to six Divas, created and original, being able to compete simultaneously in the ring, a feature absent for many years.

Online servers have been enhanced to allow for players to test out creations before downloading them into the game. During online matches, AI will fill in for absent players when not enough players are available.

Returning is the Creative Suite, where players have the ability to create their own wrestlers or divas. Creating arenas has changed from customizing a ring and its surroundings, but the ability to change the entire stadium, including the TitanTron and show logo has been added. Color options, the size of a stadium's venue and the kind of audience in the crowd, Attitude Era or Today's era, are also customizable. The Story Creation mode has been improved to allow for over 500 matches, with over 300 scenarios allowing for easier branching decisions. Superstars, stories and arenas can be uploaded on to online servers and then re-uploaded to allow for perfection. Create a Finisher, now listed under the name Special Moves, has been changed to allow for the player to create attacks for any sort of move, whether it is a signature move or grapples and strikes. The mode has been further expanded to allow for players to choose which part of the opponents body their move will focus on. A new feature is the Championship Editor that allows you to customize current and at least three new title belts. It differs from the Create-A-Championship mode from previous games in the series in that players cannot create original belts but just customize existing ones.

New to the series and replacing the Road to WrestleMania Mode is the game's Attitude Era Mode, which acts as a season mode of sorts for the game. Although the Monday Night Wars will be present, World Championship Wrestling are minimally present. To ensure that players get the full experience of the Attitude Era, they are given 35 of the Attitude Era's top superstars and over 60 cutscenes detailing aspects of the Era. To fill in the gaps and storylines necessary to understand a feud or match's context, THQ worked with WWE editors to produce 20 video packages. Other major elements, like WCW, will be given a few nods and mentions through the way of a ratings chart that follows the player through the mode as they progress and shows them changing the ratings. Due to this, during the Monday Night Wars, players will play through only the WWF's side of the Wars when the brand was losing to WCW in ratings and display how the WWE forced its way back up in ratings to become the sole juggernaut in wrestling entertainment. Smaller details, such as entrances, arenas and television graphics from the Attitude Era too have been recreated.

In addition to this, playing through the mode and its bonus options allows the players to unlock over 100 unlockable items. Commentary from the Attitude Era, which featured Jerry Lawler alongside Jim Ross, too will be present, with the Attitude Era Mode being the only mode in the entire game to feature Ross' commentary, though Lawler is present in Exhibition and Universe modes alongside Michael Cole.

Through a season of 65 matches spread out over a 2-year season, the Attitude Era Mode allows players to play through a variety of storylines, in turn, the player will switch superstars as they complete storylines, hence the mode is divided into chapters of varying lengths. Within the chapters, players are given a chance to play through the eight different characters or entities of The Rock, Steve Austin, Mick Foley, D-Generation X, Kane, The Undertaker and Bret Hart. These chapters have been given the titles, the Rise of DX, Austin 3:16, the Brothers of Destruction, The Great One, Mankind, and WrestleMania XV. In sync with the game's video packages, the player will not play through every match in the Austin-Rock feud, but will understand why the two fought against each other.

Returning is the Universe Mode, a seasonal mode designed with assistance from Paul Heyman. The mode allows for more interaction than ever before, with the ability to use created arenas and stadiums on any given show. Each recurring show, divided into minor and major, SmackDown and WWE Superstars respectively, can have its theme, roster, belt and arenas adjusted. The option to create a pay-per-view has also returned, in addition, players get the option to choose which rosters are able to participate in the PPV and what theme or match type is consistent through the event. Players can also delete shows entirely, as well as add new shows or move shows around on any day of the week. Statistics and rankings are also once again included, the former of which divides ranks into tracking record holders, historical information, the period of time a title was held and the number of times a title was held. Titles are again divided into minor, major, tag-team and divas. Scenarios also play out differently, with the game giving the player options to lead out to a branching storyline based on decisions made within the match. This allows players to choose how to attack during cutscenes, whether or not to attack and gives the option to break up tag-teams and alliances. This allows for over 200 new storylines placed in the mode in unison with all previous existing storylines being carried over from the previous two iterations of the feature. The option to turn injuries on and off is also present along with a host of other features. When a Universe Mode gets too "clunky", cumbersome or confusing, the option to reset it is present.

On October 3, THQ announced the downloadable content for WWE '13, with Four packs to be released over the course of Four months. Each superstar was available for 80 Microsoft Points or $0.99 on the PlayStation Network to buy separately and with the Accelerator Boost, Championship Belt Pack and Moves Pack for 160 Microsoft Points or $1.99 on PSN each. Fan Axxess returns, where, all the packs are included at a one time cost of 1600 Microsoft Points or $19.99 on PSN. Players who got Axxess received Diamond Dallas Page and Goldust playable characters exclusively.

On May 28, 2012, on WWE Raw, during a segment featuring John Laurinaitis and CM Punk, Laurinaitis revealed the release date of the game would be October 30, 2012, while Punk revealed the official cover art for WWE '13. On June 19, THQ then confirmed that Mike Tyson will be available in the pre-orders of WWE '13. The full roster was revealed at SummerSlam Axxess.

On July 16, 2012, THQ announced that there would be an Collector's Edition of WWE '13, which is available by pre-order for the PlayStation 3 and Xbox 360 in North America, and Europe. Also, pre-orders for the PlayStation 3 will include Disc 3 of "Stone Cold Steve Austin: The Bottom Line on the Most Popular Superstar of All Time." Pre-orders for the Xbox 360 include Disc 4.

Originally, Batista, Camacho, Chavo Guerrero, Curtis Axel, Dean Ambrose, Konnor, Rosa Mendes, Sakamoto, Sami Zayn, Trent Baretta, Viktor, Viscera, & William Regal were going to be in the game, but they were scrapped for various reasons. Still, some of them make various cameo appearances via cutscenes & TitanTrons, some of their entrances appear in character creation. 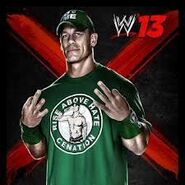