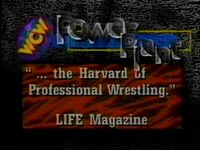 The WCW Power Plant was a professionalwrestling school located in Atlanta and owned and operated by World Championship Wrestling. The Power Plant, which was developed from a school operated by Jody Hamilton, was in operation throughout the 1990s. It stopped holding tryouts in December 1999, and closed in March 2001 when WCW was purchased by the World Wrestling Federation. It had a reputation for pushing trainees to the limit.

The Power Plant was advertised on WCW Monday Nitro, and potential trainees could schedule a three-day tryout session costing $250 where they would attempt to impress the trainers. If the applicants were suitably impressive, they would earn an invitation to join the school at a cost of $3000 for six months training. On one occasion, Sonny Siaki and two other wrestlers were admitted out of a field of twenty three applicants. In order to be accepted, applicants had to be physically fit and between the ages of eighteen and twenty-eight. Male applicants had to be at least 5 ft 9 in (1.75 m) tall and 180 lb (82 kg) in weight, and were forced to undergo a physically taxing three-day exercise session. Potential trainees unable to keep up were asked to leave. In the course of the three-day period, the applicants would often vomit and suffer from muscle spasms and cramps.

The Power Plant had an infamous reputation, with many graduates comparing it to a boot camp. This was exacerbated by the presence of head trainer Dwayne Bruce, who acted like a drill sergeant. To succeed, the trainee was required to display a great deal of strength and stamina, with less focus on basic wrestling skills. Bret Hart, who was forced to retire when a stiff kick from Power Plant graduate Bill Goldberg tore a muscle in his neck and gave him post-concussion syndrome, blamed the end of his career on the Power Plant training regime, saying "I don't think it was a priority to protect your opponent."

The Power Plant was equipped with four 18' by 18' (5.5 m) wrestling rings and a gym. A typical weekday would see the trainees begin at 9am with a half hour warm-up session consisting of calisthenics such as vertical squats, push-ups and sit-ups. They would then spend three hours practicing bumps. After a forty-minute break for lunch at 12:40pm, the trainees would take more bumps and then work on promos, finishing at 5pm.

The daily fitness regime saw trainees perform between 500 and 1000 squats for up to six hours. They would also execute 200 to 500 push-ups, 200 leg lifts and 200 abdominal crunches. In addition, trainees underwent weight training and cardiovascular conditioning exercises. There were few breaks for rests or water, and the trainers were rarely sympathetic to complaints.

The motto of the Power Plant was "Pain is temporary, pride is forever." The drop-out rate was 85%. The typical student would train for between six and nine months before graduating.

While researching professional wrestling for a BBC documentary, journalist Louis Theroux visited the Power Plant. He volunteered to take part in some training in an effort to show some respect for the business, but as he had asked Dwayne Bruce some questions about kayfabe, he was forced into very hard exercise. At one stage, Bruce encouraged the other trainees to call him a cockroach while Theroux was struggling to regain his breath. Theroux was later shown vomiting on camera.

Retrieved from "https://prowrestling.fandom.com/wiki/WCW_Power_Plant?oldid=1573165"
Community content is available under CC-BY-SA unless otherwise noted.