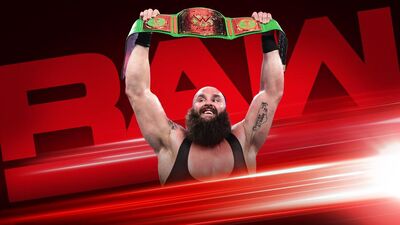 Braun Strowman stood tall in the aftermath of the first-ever 50-Man Greatest Royal Rumble Match in Jeddah, Saudi Arabia, winning the historic bout in front of a sold-out crowd at the King Abdullah Sports City Stadium.

After conquering 49 other Superstars and WWE Legends, The Monster Among Men brings his Greatest Royal Rumble Championship and trophy to Raw. Who or what will Strowman destroy next after this monumental victory?

Jeddah, Saudi Arabia became Suplex City at the Greatest Royal Rumble event, but despite The Beast Incarnate’s dominant showing against The Big Dog, his victory in the night’s Steel Cage Match came with no small amount of controversy.

When Reigns Speared Lesnar through the Steel Cage wall, it was The Beast who technically hit the ground — and therefore escaped the structure — first. As such, Lesnar was declared the winner and Reigns was, once again, turned back by The Conqueror.

However, that’s all in the past for Reigns, who needs to look ahead to his impending one-on-one battle with Samoa Joe next Sunday at WWE Backlash. How will he bounce back from his painful defeat and prepare for The Samoan Submission Machine?

The Era of Wokenness begins

Now, they bring their titles to Raw, live in Montreal, Quebec, Canada. What “delights” might the duo known collectively as The Deleter of Worlds have in store?

Who will dare step to Ronda Rousey?

[File:April 9, 2018 Monday Night RAW results.5.jpg|200px|right]] It might have cost Natalya’s team a victory in the 10-Woman Tag Team Match main event this past Monday night, but Ronda Rousey sent a powerful message to the Raw Women’s locker room by attacking Mickie James: You don’t mess with The Baddest Woman on the Planet, and you definitely don’t mess with her friends.

As Mickie recovers from Rousey’s excruciating armbar — an act of retribution after Mickie’s cheap shot on Natalya — how will she, Alexa Bliss and The Riott Squad respond to that act of aggression?

The Architect leaves Saudi Arabia with the Intercontinental Championship

In an inter-brand battle of wills, Seth Rollins defended his Intercontinental Championship against Finn Bálor, Samoa Joe and The Miz in an incredible Ladder Match at the historic, first-ever Greatest Royal Rumble event in Saudi Arabia.

The Architect has retained his prize and kept WWE’s workhorse title on Raw, but with his title defense against The Miz forthcoming at WWE Backlash, will it stay there for long? And what will be Bálor’s next move on Team Red?

Retrieved from "https://prowrestling.fandom.com/wiki/User_blog:Dean27/WWE_Raw_preview,_April_30,_2018:_What%27s_next_for_Braun_Strowman_after_monumental_Greatest_Royal_Rumble_Match_win%3F?oldid=1389488"
Community content is available under CC-BY-SA unless otherwise noted.