Tribute to the Troops results

After Lilian Garcia kicked things off with “The Star-Spangled Banner,” United States Champion Roman Reigns emerged to show his appreciation for the real champions —every serviceman and -woman in the crowd and around the world.

Universal Champion Kevin Owens, Rusev and Lana soon interrupted The Guy to redirect praise onto themselves and to their respective countries —insulting the United States in the process. With Roadblock: End of the Line coming up this Sunday, it wasn't long before their war of words turned volatile. Yet, as Owens and Rusev began to circle the ring, Big Cass joined The Big Dog to even the odds.

Looking to earn the right to battle Raw Tag Team Champions The New Day this Sunday at Roadblock: End of the Line, Cesaro & Sheamus, Golden Truth, Luke Gallows & Karl Anderson and The Shining Stars went head-to-head in a Fatal 4-Way No. 1 Contenders’ Match.

In the end of the knockdown, drag-out contest, Cesaro & Sheamus ultimately emerged victorious after they presented Primo & Epico with the holiday gift of an incredible high cross-body block from The Swiss Superman and a pair of Brogue Kicks from The Celtic Warrior.

The always-outspoken Miz came to Tribute to the Troops to boast about his starring role in “The Marine” film series and to issue an open challenge. Comedian Gabriel “Fluffy” Iglesias was on hand to introduce the Superstar who would accept the challenge, Apollo Crews.

At the height of the action that followed, Iglesias began taking selfies of himself with both Maryse and Miz outside the ring, enraging Miz in the process. This caused a disruption that allowed Crews to deliver an earth-shattering kick to The A-Lister and roll him up for the victory.

However, as Crews and Iglesias celebrated, the Intercontinental Champion quickly clarified that his challenge had not been for his title.

In the contest's final moments, the ominous titleholders emerged from all-out bedlam with the advantage, setting the stage for The Eater of Worlds to hurl Chad Gable into The Viper’s waiting RKO for the three-count.

Following an exchange of insults backstage, Bayley went one-on-one against Dana Brooke. In Bayley’s corner sat young Charlie, a special dog from “The Today Show” who is training with America's VetDogs to become a service dog for veterans and first responders.

When the action moved outside the ring, Bayley hurled Dana into the interfering Charlotte before pinning The Queen's protégé with the Bayley-to-Belly Suplex.

After things had completely spun out of control, Swann seized the opportunity and hit Gulak with a monster kick. This allowed the titleholder to pick up the huge victory en route to the WWE Cruiserweight Title Triple Threat Match this Sunday at Roadblock: End of the Line!

Following an earlier altercation, United States Champion Roman Reigns teamed with Big Cass to lock horns with Universal Champion Kevin Owens & Rusev. The showdown a true struggle for momentum as KO is poised to battle The Big Dog for the WWE Universal Championship and Big Cass is ready to take on Rusev this Sunday at Roadblock: End of the Line,

Prior to the match, Enzo Amore returned from a Bulgarian beatdown to take to the mic with Big Cass. But when the talking was over, all four Superstars went to battle, leaving everything on the canvas. In the closing moments of the action, Reigns delivered a Superman Punch to The Prizefighter and Speared The Bulgarian Brute to give his team the huge victory.

Foley makes a huge Tribute to the Troops main event 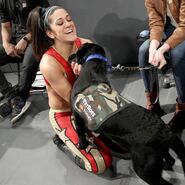 Tribute to the Troops 2016 Handshake Tour

Retrieved from "https://prowrestling.fandom.com/wiki/Tribute_to_the_Troops_2016?oldid=1573020"
Community content is available under CC-BY-SA unless otherwise noted.