In a special video message, President Barack Obama took a moment to thank the U.S. Troops for their selfless sacrifice and service to America and the Nation's interests all over the world.

After returning to SmackDown last week, WWE Diva and ring announcer Lilian Garcia made her triumphant return to Tribute to the Troops. In a powerful and heartfelt performance, she sang a beautiful rendition of the National Anthem in front of a packed arena at Fort Bragg.

Days before they meet in a Tables Match as WWE TLC, WWE's Apex Predator battled The Barrett Barrage in front of the men and women of the U.S. military. Orton and Barrett held nothing back and seemed poised to settle their score at Fort Bragg. The battle spilled to the outside where both Superstars were counted out. After the match, the brawl continued and as The Viper prepared to put Barrett through a table, David Otunga interfered to save his former Nexus teammate. Orton fought back and ended up putting Otunga through a table, sending a clear message to The Barrett Barrage.

United States Champion Dolph Ziggler joined The All-American American at ringside for Swagger's match against Zack Ryder. However, Long Island Iced-Z felt that Ziggler was an inadequate representation of America and brought out his own ally to stand in his corner ... Sgt. Slaughter! With the former WWE Champion is his corner, Zack Ryder was able to take down Jack Swagger and build on his positive momentum heading into his U.S. Title Match with Ziggler at WWE TLC.

After igniting a war of tweets with The Glamazon last week, Maria Menounos returned to the squared circle to compete in front of America's bravest. Teaming with Kelly Kelly, Eve and Alicia Fox, the entertainment reporter was more than ready to grapple with The Glamazon, Natalya and The Bellas. Maria had the last laugh and certainly the last tweet by shockingly pinning the Divas Champion to secure the win.

Rhodes and SmackDown Money in the Bank winner Daniel Bryan locked up one night after they battled in a Fatal 4-Way Match on Raw. Aware that the gutsy Bryan is never one to back down from a challenge, Rhodes targeted his opponent's injured ribs. Although momentum appeared to be in the Intercontinental Champion's corner, an assist from Booker T allowed Bryan to roll up Rhodes for the win.

The exciting new tag team of Epico & Primo took to the skies against WWE Tag Team Champions Kofi Kingston & Evan Bourne at Fort Bragg. Cousins, Primo & Epico showed their abilities by keeping up with the agility and fast-paced style of Air Boom. In the end, the cousins may have proved that blood is thicker than water and picked up an impressive win against the WWE Tag Team Champions.

At Fort Bragg, The Great White battled The Chosen One as international Superstars collided in front of American soldiers. When McIntyre resorted to nefarious tactics with a poke to the eye, an enraged Celtic Warrior put an end to the Scottish Superstar's efforts with a Brogue Kick, to the delight of our Armed Forces.

Champions and WWE's biggest titans faced off in a main event truly worthy of Fort Bragg. Teamwork reigned supreme as WWE Champions CM Punk and Big Show cleared The Miz and Del Rio from the ring and The World's Largest Athlete punched World Heavyweight Champion Mark Henry right into an Attitude Adjustment from John Cena for the pinfall. The Cenation leader then thanked the troops for their service and sacrifice.

In addition to high-octane competition, award-winning artists Nickelback and Mary J. Blige, as well as comedian George Wallace, joined WWE to entertain the troops. Each artist rocked the arena with electrifying performances and Wallace provided plenty of holiday cheer and laughs. 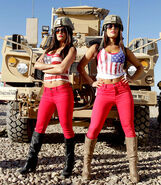 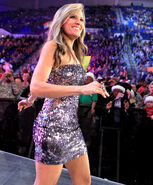 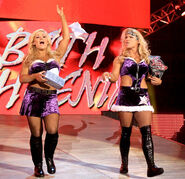 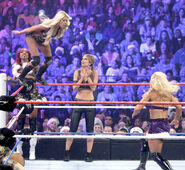 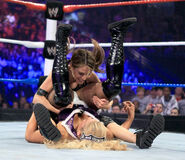 Retrieved from "https://prowrestling.fandom.com/wiki/Tribute_to_the_Troops_2011?oldid=1573015"
Community content is available under CC-BY-SA unless otherwise noted.