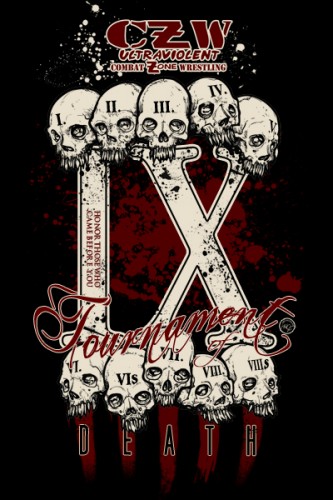 The CZW Tournament of Death is an annual professional wrestling tournament organised by Combat Zone Wrestling since 2002, during which a number of wrestlers compete in various deathmatches in (for the most part) a single-elimination tournament which is similar to World Wrestling Entertainment's King of the Ring tournament. These tournaments include the typical weapons used in hardcore wrestling such as barbed wire, nails, thumbtacks, fire, and light tubes, and are known for their large amount of blood loss.

Tournament of Death I

August 31, 2002 saw the first annual CZW Tournament of Death Tournament, held in Dover, Delaware. Non-tournament matches included a tag scramble match which saw The Backseat Boyz defeat Derek Frasier & Sonjay Dutt, Jon Dahmer & Towel Boy and The New School, as well as a Three Way Dance in which Ruckus defeated Justice Pain and Nick Berk. On winning the tournament, Wifebeater became the CZW Death Match Champion, however, the title was vacated on November 9, 2002 upon his retirement.

[1][2] Wifebeater hits Nick Mondo with a weed whacker during the final of TOD1.#Zandig vs. Nate Hatred - Barbed Wire Boards†

†Both men were attacked by Lobo, Rockin Rebel, Z-Barr, Adam Flash, & Danny Rose. Lobo then entered Flash into the tournament and challenged anyone in the locker room. The Messiah returned and defeated Flash with Carlito's Way

On July 24, 2004, the third CZW Tournament of Death (subtitled Banned...My Ass) was held in Smyrna, Delaware. This year there were no non-tournament matches held, however, the number of entrants rose from eight to twelve (including representatives of Canada's International Wrestling Syndicate).

↑ Ruckus entered as a substitute for John Zandig

‡ Sexxxy Eddy was taken to hospital following the match after suffering a wound to the arm, and so could not compete in the final

On July 30, 2005, the fourth CZW Tournament of Death took place in New Castle, Delaware. This year's show included a non-tournament Ultraviolent Student Battle Royal, won by WHACKS, as well as featuring Gypsy Joe as special guest referee for the tournament final. After the final, as Necro Butcher had eliminated the then CZW Ultraviolent Underground Champion Zandig, he was awarded the title.

↑ Robbie Mireno and Eddie Kingston entered as one, losing to Zandig in a first round handicap match

The fifth CZW Tournament of Death was held in Smyrna, Delaware on July 29, 2006. The format changed slightly for this show, with the first round matches being three-way elimination matches, the second round matches being 4-way double elimination matches, and the final being a single elimination 4-way match. Non-tournament matches included The Blackout (Ruckus & Robbie Mireno) defeating Drew Gulak & Jimmy Dream, and Kylie defeating former ECW star Chad Austin.

Tournament of Death VI returned to Smyrna, Delaware on June 9, 2007. This was a 12-man tournament, with non-tournament matches including Team AnDrew (Andy Sumner & Drew Gulak) defeating the then CZW Tag Team Champions The Blackout (Ruckus & Sabian) in a non-title match.

Tournament of Death: Fast Forward took place September 15, 2007. It was a mini-TOD for the vacant Ultraviolent Underground title.

Retrieved from "https://prowrestling.fandom.com/wiki/Tournament_of_Death?oldid=1573010"
Community content is available under CC-BY-SA unless otherwise noted.