The name "tombstone piledriver" was popularized by The Undertaker and later Kane. It was also used by Dave Finlay back then. However, the move had been used under many names by other wrestlers years beforehand. Justin Credible used a spinning variation named That's Incredible! 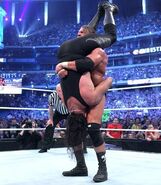