The Rundown is a 2003 American action comedy film starring Dwayne Johnson and Seann William Scott about a bounty hunter who must head for Brazil to retrieve his employer's renegade son. It was directed by Peter Berg.

Beck is a professional bounty hunter or retrieval expert who chooses not to use guns in his work due to a previous bad experience. He is hired by his boss, Billy Walker, to go to get Walker's son, Travis, from the Amazon jungle. Beck wants out of the business, and Walker agrees to make this his last job before Beck retires and opens his own restaurant. He heads down to the small South American town of "El Dorado" (also called Helldorado) to find Travis and retrieve him from the mess he is in. The town is essentially owned by Hatcher, and people there have no choice but to work for him due to his monopoly of virtually all commerce.

Beck quickly captures Travis, but Travis escapes with the help of Hatcher. Travis is looking for an ancient golden artifact known as the Gato (Cat in English) that, if the townspeople acquired it, would allow them to buy their freedom from Hatcher, which is why Hatcher wants the Gato and wants Travis free to find it for him. Travis flees into the jungle but is again captured by Beck, and after Travis fails to talk his way out of capture, they in turn run afoul of a group of rebels led by Mariana, a town clerk with whom Travis is infatuated. Beck agrees to let Travis find the Gato for Mariana before he takes him home, and with the assistance of the rebels, the three find the location of the Gato and retrieve it. That night Hatcher and his men find the rebel camp and kill all the rebels save for Travis, Beck, and Mariana. Travis is eager to donate the artifact to a museum despite his greedy tendencies, but Mariana incapacitates Travis and Beck with a toxic, hallucinogenic fruit called Konlabos and takes it, unwilling to allow Travis to keep it.

In the morning, Beck returns to the airstrip to take Travis home, but finds out that Mariana has been captured by Hatcher. Reluctant to leave after his agreement with Mariana, Beck returns to town with Travis. After learning of Beck's return, Hatcher locks down the town and sends his men out to kill him. After being bested by Hatcher's gunmen, Beck reluctantly takes up guns and reveals himself as a skilled marksman, effortlessly dispatching Hatcher's men and freeing Mariana. Hatcher confronts Beck amidst the townspeople and is shot when he attempts to attack Mariana. Agreeing to leave the town, Hatcher attempts to walk away but collapses dead. Beck and Travis return to Walker while Mariana and the townspeople are left the Gato. With Walker, Beck watches as he is paid and Travis is hit and ridiculed by his father. As a sort of toast to his last job, Beck feeds Walker and his men the same fictional toxic fruit that Mariana fed to him, and they collapse in paralysis as an overjoyed Travis leaves with Beck, grateful but still irritating him. The film ends with Beck muttering "I'm gonna kill you" after Travis fakes a punch at him.

The Rundown was warmly received by both critics and moviegoers. The film holds a "fresh" 71% on Rotten Tomatoes. This was the first WWE Film to ever be able to be produced outside of production.

Roger Ebert gave the film 3 1/2 stars out of 4, saying "The jungle locations give the film a texture and beauty that underlines the outsized characters."

Despite the positive acclaim, the modest box office take for the film makes a sequel possible but not entirely likely. Director Peter Berg has expressed interest in making a sequel to the film but notes that "no one can ever get motivated and focused enough to do it."[1] 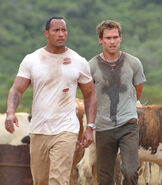 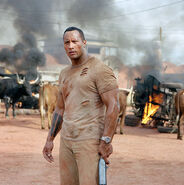 Retrieved from "https://prowrestling.fandom.com/wiki/The_Rundown?oldid=1259812"
Community content is available under CC-BY-SA unless otherwise noted.