Jake Carter is assigned to protect a "high-value package", a beautiful whistle-blower who wishes to expose a corrupt military defense contractor. However, the military hires a heavily armed team of mercenaries to put an end to her life, along with anyone else who gets in their way, and it's up to Carter to stop them at any cost.

In February 2014, The Miz was announced to reprise his role of Jake Carter in the third sequel to The Marine and would be co-starring with Summer Rae, who became the first ever WWE Diva to appear in a WWE Studios film. Filming started in April 2014 in Squamish, British Columbia and with principal photography ending in May 2014. 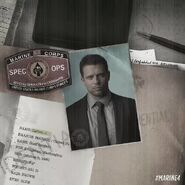 Retrieved from "https://prowrestling.fandom.com/wiki/The_Marine_4:_Moving_Target?oldid=1259809"
Community content is available under CC-BY-SA unless otherwise noted.