TLC: Tables, Ladders & Chairs is a professional wrestling event produced annually by World Wrestling Entertainment (WWE), a Connecticut–based promotion, and broadcast live and available only through pay-per-view (PPV). The event was established in 2009, replacing Armageddon in the December slot of WWE's pay-per-view calendar.

The concept of the show is based around the primary matches of the card each containing a stipulation utilizing tables, ladders and/or chairs as legal weapons. The event's concept was voted by fans via WWE's official website and was chosen over an event with street fight main events and an event featuring a single-elimination tournament.

Since its origin, the event has been held only in indoor arenas in the United States. Championship bouts are scheduled on every card, with the lower-tier titles featured on the undercard and the top-tier featured on the main card. Under the Brand Extension, WWE assigns its performers to either Raw, SmackDown or in the case of the 2009 event, ECW, which cause matches to be set up between wrestlers on the same show. In 2012, replacing Money in the Bank (PPV) in the July slot of WWE's pay-per-view calendar.

The concept of this pay-per-view is that the main event matches have stipulations that involve legally using tables, ladders and chairs. In 2010, every match involved tables, ladders, or chairs. During the show, there were Tables matches, Ladder matches, Chairs matches, and TLC matches. 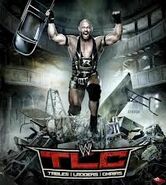 Retrieved from "https://prowrestling.fandom.com/wiki/TLC:_Tables,_Ladders_%26_Chairs_(PPV)?oldid=1757755"
Community content is available under CC-BY-SA unless otherwise noted.