A Steel Cage match is a wrestling match type where two or more opponents must escape a steel cage to become the victor, though sometimes the rules are bent where they may also win via pin or submission as well.

A cage match is usually booked for a feud that either has one wrestler running away, or has other individuals running in to help a wrestler. As a result, the initial purpose of a cage is to keep the wrestlers in and outside interference out. However, the match is also no-disqualification, allowing the wrestlers to use the cage as a weapon (such as throwing an opponent into the cage wall), do bumps off the top of the cage (such as the famous splash in Madison Square Garden Jimmy Snuka), or use weapons that allies throw over the top of the cage. If the door is not locked, outsiders may enter through the door and interfere (which is supposed to defeat the whole purpose of having a cage match, but has actually proved quite effective in getting heels over).

Rules of a Steel Cage Match

The most basic of cage matches has a variety of rules, depending on the company and the nature of the angle in which the cage is being introduced.

Variations of the Cage Match

The cage match has more variations that almost any other match type.

This match is the same as the normal one (complete with the flexible rules system), but the top is covered in barbed wire, preventing escape over the top (or, at least, causing serious cuts to the person who does escape that way).

In this barbed wire cage match, the only way to win is by pinfall, but a pinfall only counts towards victory if the one being pinned is bleeding. This match has only been featured once, at the Hard Justice 2007 PPV.

There are two versions of this match. One is mostly in Mexico, where the only way to win is via escape. The electricity is turned on and off at regular intervals to allow the wrestlers a chance to escape.

The other one was in Total Nonstop Action Wrestling, at their Lockdown 2007 PPV. The cage was constantly electrified (save for the door), and the only way to win was by pinfall or submission.

Hell in a Cell

This variation can only be seen in World Wrestling Entertainment, as they have the intellectual property. The cage has a roof, and instead of resting on the ring aprons, it extends several feet on each side on the arena floor. This match is famous for the legitimate injuries that have been sustained in this match, such as Mick Foley loosing a tooth through his nose. 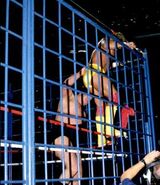 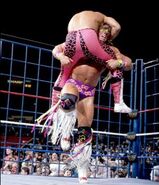 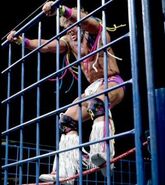 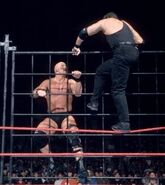