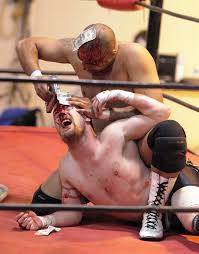 A Staple gun match (also called Unlucky 7/13/21) is a professional wrestling match type where two or more sides (individual or team) compete in a hardcore match featuring at least a staple gun. To win, one must staple a certain pre-set number of items to their opponent's body.

Typically dollar bills will be used as the object to staple. The number of bills stapled to each wrestler allows the crowd to have a running visual count of who the winning wrestler or team is. When a number is in the match match (such as Unlucky 21), then that means there are 21 bills in play and an insurmountable majority of 11 must be stapled to the opponent(s) to be declared the winner.

While this match type is common in American hardcore promotions such as IWA Mid-South and Combat Zone Wrestling, it has also been seen in Japan s Big Japan Pro Wrestling. While staple guns have been a regular weapon in hardcore match for a long time, Ian Rotten is credited with creating this match by making stapling the winning stipulation.

Retrieved from "https://prowrestling.fandom.com/wiki/Staple_gun_match?oldid=1501403"
Community content is available under CC-BY-SA unless otherwise noted.