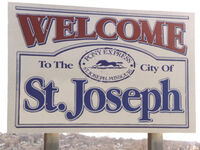 St. Joseph (informally St. Joe) is a city in and the county seat of Buchanan County, Missouri, United States. It is the principal city of the St. Joseph Metropolitan Statistical Area, which includes Buchanan, Andrew, and DeKalb counties in Missouri and Doniphan County, Kansas. As of the 2010 census, St. Joseph had a total population of 76,780, making it the eighth largest city in the state, third largest in Northwest Missouri. The metropolitan area had a population of 127,329 in 2010.

Retrieved from "https://prowrestling.fandom.com/wiki/St._Joseph,_Missouri?oldid=1553851"
Community content is available under CC-BY-SA unless otherwise noted.