The Shane Shamrock Memorial Cup is an annual tournament first held in 1999. It is one of the premier events held by MCW Pro Wrestling. The premise is that twelve wrestlers are placed in six one-on-one matches at the beginning of the show the tournament is held on, and the six winners advance to an elimination match, which is the show's main event.

The tournament is named in honor of Shane Shamrock, a popular MCW wrestler who was shot and killed during an altercation with police officers in 1998. The previous month, Shamrock had become first and only MCW Light Heavyweight Champion, having won the belt in a six-way match and was retired following his death.

Ring of Honor: Survival of the Fittest

When MCW closed its doors in 2003, an arrangement was made with Ring of Honor, when it made its debut in the Baltimore area, to carry on the tradition of the Shane Shamrock Cup. At ROH's The Last Stand, it was announced ROH would continue the Shane Shamrock Cup on June 24, 2004. In March 2004, Rob Feinstein was forced to step down as owner of ROH when his legal problems became public. Less than a week before the tournament, Feinstein sold his share of ROH to Cary Silkin, proving he had actually had stake in the company for the past three months. This upset Maryland promoter Dick Caricofe, who was letting ROH use his Maryland Promoter's License, so he pulled out of the show. ROH was forced to move the show to Philadelphia, PA and renamed the show Survival of the Fittest. Survival of the Fittest has since become an annual ROH tournament.

Return of the Shane Shamrock Cup

Maryland Championship Wrestling held its 10th Annual Shane Shamrock Memorial Cup (Branded as "MCW Shamrock Cup X") on July 31, 2010. The number one contender for the MCW Heavyweight Championship, Ryan McBride opened the night in singles competition against reigning and defending champion Patrick Brink, defeating him (despite interference by Adam Cole and Tyler Hilton who were headed off by Cobian and Tommy Dreamer) with the 450° Splash to become the new MCW Heavyweight Champion.

Later in the night, Adam Cole and Tyler Hilton would issue a challenge to Tommy Dreamer that if they won, they would be able to participate in the upcoming TNA Pay-per-view event, Hardcore Justice. Tommy Dreamer accepted under the provision that if he won, his tag team partner, Cobian, would become the new MCW Rage champion. Adam Cole would be made to submit by Cobian by way of a Backbreaker. MCW Shamrock Cup X also saw the return of Mickie James to Maryland Championship Wrestling in a singles competition against Mia Yim, who she defeated with a Mickie-DT;and a "Battle of the Blogs" match featuring The Baltimore Sun's sports columnist, Peter Schmuck, and Fed-Up who were defeated in a Six-Man Tag Team match against The Baltimore Sun wrestling columnist, Kevin Eck, Cole Calloway, and Ronnie Zukko by way of a Cutter from Kevin Eck to Peter Schmuck.

Prior to the nights events, several qualifying matches were held in a tournament to find out who would be participating in the six-man elimination-style bout. Because Ryan McBride had won the previous year, he did not have to qualify for the match. Rich Swann defeated Ruckus, Sami Callihan defeated Scott Reed, Teddy Stigma defeated Joe Ettell, and Tommaso Ciampa defeated Bobby Shields to qualify for The Cup. Christian York, taking the place of a recently retired Jose Maximo, would qualify for the Shane Shamrock Memorial Cup by defeating The Best Around. He would then go on to defeat (in order of elimination from last to first) Ryan McBride, Teddy Stigma, Tommaso Ciampa, Rich Swann, and Sami Callihan to win the Shane Shamrock Memorial Cup, making him becoming the first man to do so three times. 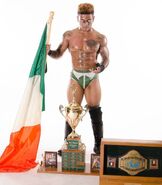 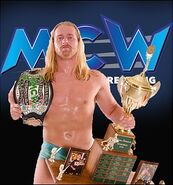 Retrieved from "https://prowrestling.fandom.com/wiki/Shane_Shamrock_Memorial_Cup?oldid=1557382"
Community content is available under CC-BY-SA unless otherwise noted.