September 13, 2014
The September 6, 2014 Edition of OVW Television is a Professional wrestling television show of the Ohio Valley Wrestling promotion, which took place on September 3, 2014 at Davis Arena in Louisville, Kentucky. 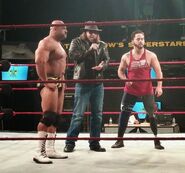