September 30, 2011
The September 23, 2011 Edition of Smackdown is a Professional wrestling television show of the WWE's Smackdown brand, which took place on September 20, 2011 at the Wright State University's Nutter Center in Dayton, Ohio.

The night kicked off with WWE's Executive Vice President of Talent Relations John Laurinaitis addressing the WWE Universe about whether WWE COO Triple H is in control. Next, Laurinaitis introduced Mark Henry as the new World Heavyweight Champion. After Henry told the WWE Universe that he plans to hold onto his World Title for a long time, Triple H entered the ring.

But before the COO could speak, Christian interrupted him and yet again claimed he deserved one more World Title Match. After assuring the WWE Universe that he is indeed in control, Triple H obliged Christian by putting him in a Lumberjack Match against Henry for the World Title. The winner would defend against Randy Orton at Hell in a Cell.

Outmatched and overpowered, Heath Slater didn't stand much of a chance against Sheamus. When The Celtic Warrior was ready to end things, he put the punctuation mark on the bout by blasting Slater in the face with a vicious Brogue Kick for the win.

After losing to Divas Champion Kelly Kelly & Eve on Raw, Beth Phoenix and Natalya rebounded strong in a match against A.J. and Kaitlyn. To close the deal, Phoenix smashed A.J. to the canvas with a bone-rattling Glam Slam.

The voices in Randy Orton's head must have been telling him to do really, really bad things on this night. After being disqualified for smashing Cody Rhodes in the face with his protective mask, The Viper unleashed hell on Rhodes. First The Viper punched, RKO’d, then tossed Rhodes to the arena floor. Next, Orton bashed his former Legacy ally in the skull with the timekeeper's bell. But Orton wasn't done yet. To put the finishing touches on Rhodes, the former World Champion brutally RKO’d him onto the announce table.

No longer under Jinder Mahal's control, The Great Khali relished in an opportunity to face Mahal within the squared circle. With a massive display of force, Khali obliterated his former manipulator with a Punjabi Plunge.

The mystery surrounding the two Sin Caras continued to grow. After one Sin Cara was fully engaged in battle with Daniel Bryan, the other Sin Cara attacked and snatched the pinfall for himself.

Christian clearly bit off more than he could chew when he found himself in the first ever SmackDown World Title Lumberjack Match against the newly crowned World Heavyweight Champion Mark Henry. Even the lumberjacks found themselves outmatched against the champion, despite having a numbers advantage.

When the sea of Superstars surrounding the ring swarmed the champion, he easily pushed them away. To finally assert his dominance, he hoisted the hapless Trent Barreta high overhead and tossed him onto the dazed lumberjacks.

Then – still seething after losing the World Title – Randy Orton charged to the ring to stare down the reigning champion. As the two sized each other up, The Viper struck first. With Henry still reeling, Orton forced him out of the ring with a well-targeted dropkick. Showing no signs of fear, Orton stared down Henry who remained outside the ring. What will happen when the two are locked inside unforgiving steel at Hell in a Cell? 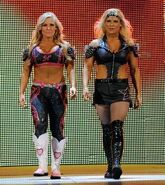 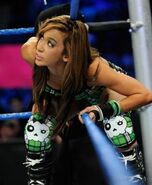 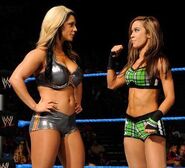 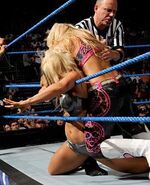 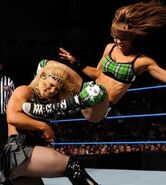 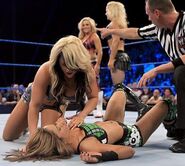 Retrieved from "https://prowrestling.fandom.com/wiki/September_23,_2011_Smackdown_results?oldid=1570254"
Community content is available under CC-BY-SA unless otherwise noted.