September 28, 2016
The September 21, 2016 Edition of NXT is a Professional wrestling television show of the WWE, which took place at the Full Sail University in Winter Park, Florida on August 25, 2016.

ORLANDO, Fla. — Just one week after his brutal attack sent NXT Champion Shinsuke Nakamura out of Full Sail University in an ambulance, Samoa Joe strode to the ring with a little extra swagger in his step. The submission specialist had The King of Strong Style's medical report in his hands, and revealed to the NXT Universe that Nakamura suffered contusions to his lower lumbar, severe inflammation in his left elbow and a separated shoulder.

However, while the medical report stated that the NXT Champion would not require surgery, Joe said that Nakamura's rehabilitation would keep him out of action for six to 12 weeks. With that in mind, Samoa Joe demanded that NXT General Manager William Regal either give him Nakamura, or strip The King of Strong Style of the title and give it to him. When Regal refused on the spot, Joe charged up the ramp and gave the NXT GM an ultimatum: Make the right choice, or the NXT roster will suffer the consequences.

With Hideo Itami hunting him down, Austin Aries tried to keep himself occupied with hard-hitting NXT Superstar Oney Lorcan in singles action this week. “The Greatest Man That Ever Lived” was supremely confident, showing off after gaining the upper hand on the newcomer. However, the tides turned in Lorcan's favor after he got fed up with Aries’ antics and slapped him in the face.

Lorcan controlled Aries with a snug headlock for a good portion of the match, but Aries cut off the Boston bruiser's offense by picking Lorcan up and sending him crashing spine-first into the ring apron. Aries survived a flurry of European uppercuts from Lorcan and connected with a devastating knee to the jaw before locking on Last Chancery to get the submission victory.

After the bell, Aries grabbed the microphone and dared Itami to meet him in the ring, calling the Japanese striker a coward. Itami was happy to oblige, but Aries backed down at the last second, running away before any blows were exchanged.

As NXT Women's Champion Asuka continues to insist that no one is ready to face her, the rest of the division is out to prove The Empress of Tomorrow wrong. Aliyah came out of the gates strong against Billie Kay, but the size and strength she gave up to the Australian competitor proved to be the difference. Billie stopped Aliyah in her tracks with a big boot to the face to pick up a big win.

Just days after making a huge impact on Monday Night Raw, Cedric Alexander made his NXT debut against Andrade “Cien” Almas. Alexander showed there were no adjustments to be made in his game, as he went hold for hold with the skilled luchador, bringing Full Sail University to its feet. Almas was the first to take flight, crash landing on Alexander with a twisting plancha to the arena floor.

Back in the ring “Cien” kept Alexander grounded, wearing the North Carolina native down until Alexander springboarded off the ropes with a kick to the head, then launched himself over the ropes at Almas with a beautiful tope con hilo. The luchador countered with raw power, slamming Alexander into the mat and striking him with brute force.

Almas tried to finish off his rival with his trademark charging knees in the corner. However, Alexander recovered and caught a charging Almas, tossing him up into the air for the Lumbar Check to make his NXT debut a successful one. After the match, a frustrated “Cien” seemed reluctant to shake the NXT newcomer's hand, but eventually showed sportsmanship, and brought his opponent in for a hug with a clear message: “Welcome to NXT.” 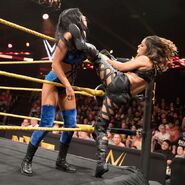 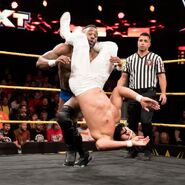