For Triple H, he once again suffered the indignity of watching Randy Orton take Evolution's best punch, only to get up and spoil another party.

For Christy Hemme, it was a night of celebration, as the red-haired California hottie beat out Carmella Decesare and won the $250,000 RAW Diva Search.

For Kane, it was a pure nightmare, as his pregnant wife Lita lost her baby just one week after an accidental collision in the ring.

And for WWE fans, it was a night of empowerment. Mr. McMahon opened the show with his major announcement, and as usual, the boss delivered with some groundbreaking news.

On October 19, RAW produced a special Taboo Tuesday pay-per-view live from Milwaukee. In an interactive affair, fans would be given the authority to make the match-ups and even decide match stipulations in some cases.

Vince did take the liberty to announce one match himself. RAW General Manager Eric Bischoff was set to face his unique nephew Eugene, who arrived at RAW with some attitude Monday, knocking his uncle out after Bischoff tried to talk his way out of a Taboo Tuesday battle.

Of course, Bischoff's problems don't compare with the trauma Kane went through on RAW. The Big Red Monster was actually in the hospital room when local doctors announced Lita had lost her baby. Kane became emotionally distraught upon hearing the tragic news.

Orton had an eventful night himself. After being demolished outside the ring by Triple H and Batista during the main event six-man tag match, he was carted off, nearly unconscious; leaving partners Shelton Benjamin and Chris Benoit behind to take on blood-thirsty Evolution.

And just when Evolution thought it had the upper hand, Orton returned with a vengeance, sprinting down the ramp and into the ring and pouncing on Ric Flair with a RKO for the win.

Christian and Tyson Tomko then beat the Showstopper down in the middle of the ring for good measure. 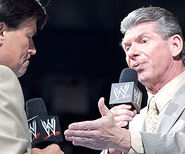 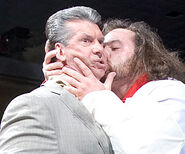 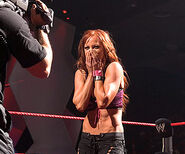 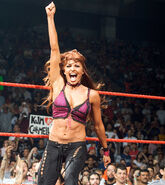 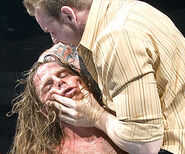 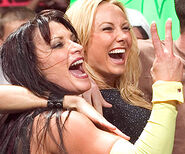 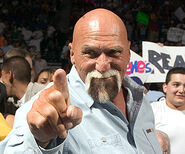 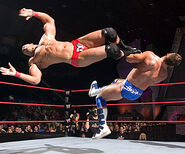 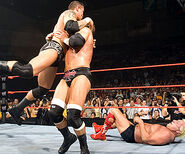 Retrieved from "https://prowrestling.fandom.com/wiki/September_20,_2004_Monday_Night_RAW_results?oldid=1570244"
Community content is available under CC-BY-SA unless otherwise noted.