Following Kevin Owens’ heinous Sin City SmackDown attack on Mr. McMahon that gave The Chairman three fractured ribs, SmackDown LIVE Commissioner Shane McMahon returned from his suspension to Team Blue with one clear directive: To let KO know that he was in for the beating of a lifetime when they meet inside Hell in a Cell on Oct. 8. Shane touched on his tumultuous history with his father, but said he loves him and plans on avenging him inside Hell in a Cell.

Looking to continue his ascent up the ranks on SmackDown LIVE, Aiden English took aim at Randy Orton. The Mozart of Mayhem brought his best to The Viper, managing to keep him down and, at times, inflict significant damage to The Apex Predator, but Orton defeated English with a vicious RKO out of nowhere after English took flight from the top rope.

Immediately following Randy Orton's victory over Aiden English, an irate Rusev hit the scene and boldly proclaimed that he was here to avenge his 10-second loss to Orton at SummerSlam. He challenged The Viper to a match on the spot, and Orton, never one to back down, immediately accepted.

Almost immediately after the match started, English popped up on the apron, and Rusev pushed Orton into him. Rusev capitalized on the distraction to connect with a kick flush to Orton's face, giving The Super Athlete a controversial victory over his nemesis in mere seconds. However, questionable or not, The Bulgarian Brute celebrated the victory as though it was one of the biggest accomplishments of his career, both on the ramp and in a backstage interview.

Doubling down on his efforts of last week, WWE Champion Jinder Mahal once again verbally lambasted his WWE Hell in a Cell challenger, Shinsuke Nakamura. Flanked by The Singh Brothers, The Modern Day Maharaja once again promised to make an example out of WWE's Rockstar at WWE Hell in a Cell and reiterated his claim to Nakamura that the WWE Universe would turn on him the same way they turned on Mahal.

Following Jinder's harsh assertions, The King of Strong Style made it clear in a separate interview that Mahal wouldn't be laughing at WWE Hell in a Cell, as Nakamura would win the WWE Title.

Last week, Baron Corbin unleashed a post-match ambush on AJ Styles and Tye Dillinger after the two Superstars combatted for the United States Title before forcefully declaring that he would be the one to answer The Phenomenal One's U.S. Open Challenge tonight.

Styles first riffed on the Kevin Owens/McMahon family situation and, despite having problems of his own with Shane in the past, declared he was supporting Shane and the McMahons wholeheartedly. Styles then gave his thoughts on Corbin, prompting The Lone Wolf to enter the Oracle Arena with purpose, attacking Styles during the ring introductions before the bell could even ring. Corbin's barrage was only halted when Dillinger hit the scene to jump his foe, returning the favor after being on the receiving end of several blindside attacks from The Lone Wolf in recent weeks.

The Perfect 10's attack apparently caused Corbin to hurt his leg, leaving The Lone Wolf vulnerable and allowing Styles to apply the excruciating Calf Crusher when Corbin attempted to re-enter the ring. With Corbin tapping furiously, Styles soon broke the hold, leaving Corbin in a heap of pain and without his championship match ever taking place.

When approached by Renee Young for an interview in the backstage area, a furious Corbin vowed to “get even.”

Charlotte Flair made her long-awaited return to SmackDown LIVE and thanked the WWE Universe for their support during what was a very difficult month for her, her father Ric Flair and the Flair family. However, the emotional moment was quickly interrupted by SmackDown Women's Champion Natalya, who wanted to host what she was calling a “Celebration of Women.” Before she could get too far into the proceedings, however, she was swiftly cut off by The Queen, who made it clear that she wanted to challenge Natalya for the title.

Becky Lynch, Naomi and Tamina, who was accompanied by Lana, also arrived to make their championship ambitions known. Thinking on his feet, SmackDown LIVE General Manager Daniel Bryan hit the scene and announced that, in classic Land of Opportunity fashion, tonight's main event would be Charlotte Flair vs. Tamina vs. Naomi vs. Becky Lynch, with the winner going on to face Natalya for the SmackDown Women's Championship at WWE Hell in a Cell.

Fresh off of regaining the SmackDown Tag Team Championship by defeating The Usos in a huge Sin City Street Fight, The New Day kept the good vibes going against The Hype Bros on SmackDown LIVE.

The New Day did not show any signs of wear after the brutal match from last week, toppling Zack Ryder and Mojo Rawley after hitting The Ultimate Broski with the Midnight Hour for the win, as The Usos watched from the announce table.

Appearing on SmackDown LIVE via satellite, Kevin Owens very calmly and coldly addressed his conflict with the McMahon family. Showing no remorse for his attack on Mr. McMahon last week, KO hauntingly rehashed the details of the devastating beatdown and admitted having remorse for not inflicting more punishment on WWE's Chairman, also blaming Shane for his vicious attack.

Owens then preemptively apologized to everyone who will watch WWE Hell in a Cell, letting them all know that if they thought his attack on Mr. McMahon was bad, then they would have to brace themselves for what he was going to do to his son inside Hell in a Cell, because it would be far, far worse.

After all the pomp and circumstance, The Showoff reinforced that nobody can do what he can do in the ring before telling the WWE Universe that he, appropriately, had two words for them ... who cares.

With so much at stake, four of Team Blue's top Superstars let it all out in their quest to become the next Superstar to challenge Natalya for the SmackDown Women's Championship at WWE Hell in a Cell.

All four nearly captured victory at points in the contest, as they held nothing back in pursuit of the title. However, in a chaotic sequence, Tamina landed a top-rope splash on Becky, Naomi interrupted the count, Lana dragged Naomi out of the ring and received a kick to the head for her troubles, and Tamina kicked Naomi off the apron. Finally, Charlotte came all the way back from one of the toughest stretches of her life, defeating Tamina with a vicious kick, securing her ticket to WWE Hell in a Cell and earning the chance to regain her throne. 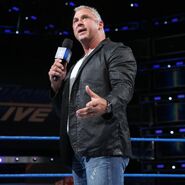 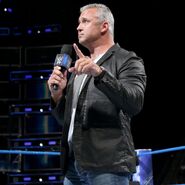 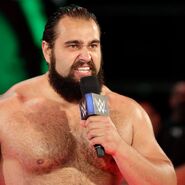 Retrieved from "https://prowrestling.fandom.com/wiki/September_19,_2017_Smackdown_results?oldid=1570239"
Community content is available under CC-BY-SA unless otherwise noted.