Triple H was steamed. Less than 24 hours earlier, at Night of Champions, WWE's Chief Operating Officer competed against CM Punk. Although he prevailed in the bout and retained his position as COO, The Game was nonetheless furious about how it all went down. Not only did The Miz & R-Truth attempt to interfere in the bout, an already terminated Kevin Nash marched through the crowd and amubushed both men.

Perhaps feeling badly about how events transpired the night before, Triple H informed his now respected rival, Punk, that he was being included in a Triple Threat Hell in a Cell Match against newly crowned WWE Champion John Cena and Alberto Del Rio.

The Voice of the Voiceless appeared pleased to hear he would receive a title opportunity in two weeks, but he was hardly finished making a statement. He began to expound on who he thought was behind the odd incidents of the previous several weeks.

Before Punk could reveal the full extent of his hypothesis, WWE's Executive Vice President of Talent Relations, John Laurinaitis emerged. The Second City Savior then explained that he felt the Executive VP was the mastermind behind the shenanigans. When The Game asked Laurinaitis if Punk was telling the truth, however, Laurinaitis appeared evasive. When Executive VP attempted to fire the anti-establishment Superstar, Triple H immediately reversed the decision. WWE's COO did insist, however, that by the end of the night someone would be fired.

Despite Christian's campaign to get “one more match” for the World Heavyweight Title, the leader of the Peeps wasn't doing too much talking tonight. After taking Sheamus’ Brogue Kick to the face at Night of Champions, Christian teamed with Wade Barrett, David Otunga & Michael McGillicutty to battle The Celtic Warrior, WWE Tag Team Champions Air Boom & Justin Gabriel in an Eight-Man Tag Team Match. With animosity ricocheting off the ring ropes, the respective squads went after one another with hatred and zeal. In the end, it would be Sheamus who looked dominant as he secured the victory for his team.

Still fuming from the news that he must compete in a Triple Threat Hell in a Cell Match at the Hell in a Cell pay-per-view, Alberto Del Rio looked ready to steamroll any and all comers. Unfortunately for John Morrison, he found himself directly in Del Rio's path. The furious Mexican allowed Morrison no quarter in their singles match, neutralizing JoMo's high-energy assault and snapping on the cross armbreaker for the win. And, perhaps more importantly to The Mexican Aristocrat, sending a message to his Hell in a Cell opponents, WWE Champion John Cena and CM Punk.

Could U.S. Champion Dolph Ziggler and Vickie Guerrero be any ruder? As celebrity guest Hugh Jackman addressed the WWE Universe, the annoying couple saw fit to interrupt. The acclaimed actor was explaining his new movie, “Real Steel,” in which he plays a promoter who guides an underdog competitor in a world of fighting robots, when Dolph and Vickie intruded. The pair insulted Jackman, prompting the actor to challenge them: He would find WWE's biggest underdog and guide him to victory over the U.S. Champion later in the evening. Challenge accepted!

Would the real Sin Cara please stand up? For the second time in four days, a lookalike Sin Cara has emerged and confronted his doppelganger. Before Sin Cara could face off against another masked nemesis, Intercontinental Champion Cody Rhodes, in a non-title match, the second Sin Cara flew in from the entrance ramp. The luchadors sized each other up before landing a series of explosive moves on one another. As a result, the second Sin Cara exited the squared circle while his mirror image stood tall in the ring.

After their disrespectful actions the previous evening at Night of Champions, The Miz & R-Truth appeared extremely apologetic as they faced WWE Chief Operating Officer Triple H. Not only did the dastardly duo lay their hands on a WWE referee, they attacked Triple H during his match against CM Punk. As punishment, The Game fined them $250,000 apiece, placed each on probation and arranged a main event tag team match pitting them against new WWE Champion John Cena & CM Punk.

Fifteen years is a long time to wait. And it appears that wait has left newly minted World Heavyweight Champion Mark Henry angry and cynical in the extreme. When WWE Hall of Famer Jim Ross attempted to interview him, The World's Strongest Man chastised Ross, grabbed him by the tie and forced him to his knees. As a result, fellow announcer Jerry Lawler approached and tried to calm the situation. The World Heavyweight Champion released Ross and appeared to relent. The calm, however, proved only a prelude to the storm. As the men walked away from each other, Henry turned around and, with a scowl across his face, ambushed Lawler and left the WWE Hall of Famer motionless after putting him through the announce table with The World's Strongest Slam. As the champion heatedly marched back to the locker room, medical personnel attended to Lawler.

The entire ugly spectacle will undoubtedly register on Randy Orton's radar. Especially after it was announced that The Viper will invoke his rematch clause at Hell in a Cell in two weeks.

The campaign of Beth Phoenix & Natalya to rid the WWE of so-called “model” Divas took yet another step in the wrong direction. Divas Champion Kelly Kelly & Eve overcame a significant mass and might disadvantage when the Latina lovely rolled up Natalya for the win. The victory couldn't have come at a worse time for The Glamazon since she appeared devastated after losing her title match against Kelly Kelly the previous day in her hometown of Buffalo, N.Y. at Night of Champions.

Celebrity guest Hugh Jackman found an underdog to champion in the form of Long Island Iced-Z, Zack Ryder. The Hollywood heavyweight successfully led the self-proclaimed Internet Champion to a win over U.S. Champion Dolph Ziggler in a non-title match. During the bout, the Academy Awards show host clocked Ziggler in the face when the referee was busy reprimanding Vickie, which led to a win for Ryder. After the match, Vickie stormed up the entrance ramp as Ryder and Jackman celebrated.

In the locker room area, Jack Swagger sensed his opportunity. The All-American American approached Vickie in the wake of Ziggler's loss to ask if she would manage him. To Swagger's delight, WWE's resident cougar agreed.

Before WWE Champion John Cena and CM Punk join Alberto Del Rio in a first-ever Triple Threat Hell in a Cell Match in two weeks, the pair teamed up to face The Miz & R-Truth in the night's main event match. The contest was arranged by WWE Chief Operating Officer Triple H as punishment for the two attacking a referee as well as The Game himself at Night of Champions. The two conspiracy theorists appeared to be putting up a respectable offense against their formidable foes when The Second City Savior delivered a grave GTS to The Cleveland Screamer in his hometown to lay him out for the victory.

After the bell, The Game emerged to wish one Superstar the best in their future endeavors. Actually, make that two Superstars. The Game fired both Miz & Truth, who looked gutted by the decision. As “The Awesome Truth” absorbed the news, they grew enraged and attacked Triple H from behind in the locker room area. As they lashed out on the COO, various Superstars broke up the ruckus and tossed Miz & Truth from the arena.

Triple H promised to fire someone 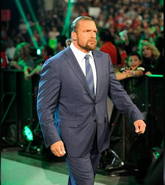 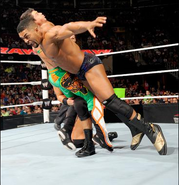 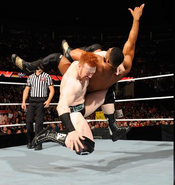 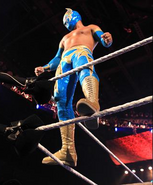 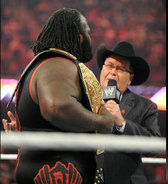 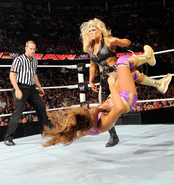 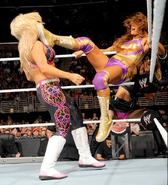 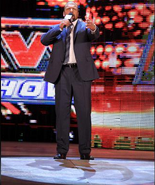 Retrieved from "https://prowrestling.fandom.com/wiki/September_19,_2011_Monday_Night_RAW_results?oldid=1570235"
Community content is available under CC-BY-SA unless otherwise noted.