The September 18, 2003 Edition of Smackdown is a Professional wrestling television show of the WWE's Smackdown brand, which took place on September 16, 2003 at the RBC Center in Raleigh, North Carolina.

Fans were treated to one of the most breathtaking matches in recent history this week on SmackDown! when Kurt Angle defended his WWE Championship against Brock Lesnar in a 60-minute WWE Ironman Match. While amazing to watch, however, what was meant to be a match to determine the better athlete between the two WWE Superstars turned into Brock Lesnar cheating his way to victory.

Right off the bat, Lesnar clocked Angle several times with a steel chair. The move cost the challenger a fall, but it was all part of Brock's plan to weaken the WWE Champion. Soon after, Brock was able to gain two quick falls on the fallen Angle. Throughout the entire hour, antics like this were the norm from Brock Lesnar. Like a true champion, however, Kurt Angle fought his way through the horrible disadvantages that were put in his way. In the end, it was Brock walking away with the WWE Championship, but it wasn't because of a lack of athleticism on Kurt Angle's part. Rather, it was because of a pre-meditated plan by the animal Brock Lesnar to cheat in order to win.

Also on SmackDown!, twice is nice for Eddie Guerrero, as he became a double champion. He and Chavo defeated the Self-Proclaimed World's Greatest Tag Team for the WWE Tag Team Championship.

Kurt Angle (c) vs. Brock Lesnar in a 60-minute Iron Man Match for the WWE Championship 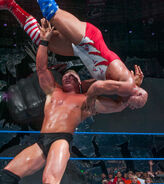 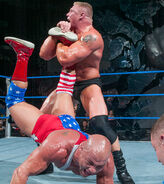 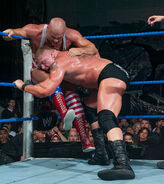 Retrieved from "https://prowrestling.fandom.com/wiki/September_18,_2003_Smackdown_results?oldid=1284210"
Community content is available under CC-BY-SA unless otherwise noted.