The September 16, 2011 Edition of Smackdown is a Professional wrestling television show of the WWE's Smackdown brand, which took place on September 13, 2011 at the Air Canada Centre in Toronto, Ontario, Canada.

An emotional Edge returned home to both SmackDown and Toronto, informing the WWE Universe that he would host “The Cutting Edge” later in the show with special guests World Heavyweight Champion Randy Orton and Mark Henry. However, The Master Manipulator was promptly interrupted by Intercontinental Champion Cody Rhodes, who simultaneously insulted The Rated-R Superstar and reminded the WWE Universe of his monumental triumph over The Viper on a the RawSuperShow four days earlier.

Edge humiliated the infuriated Rhodes, walking out on him before he “fell asleep.” This caused the irate Intercontinental Champion to launch into a tirade on the WWE Universe.

However, as he was proclaiming whose face should be covered up first, a disguised Ted DiBiase – wearing one of Rhodes’ paper bags – suddenly knocked him off his feet from the front row. Shaking with rage, DiBiase pulled off his cover and jumped the barricade, dishing out an onslaught on his adversary that culminated in Dream Street. Though Rhodes escaped before he, too, was covered by a paper bag, DiBiase's successful retribution brought the WWE Universe to its feet.

In very a personal match, the ultra-aggressive Sin Cara went too far with his unrelenting attack on Daniel Bryan – continuing his assault after his opponent got trapped upside-down in the turnbuckle. This left the referee no choice but to call for the bell and award the match to Bryan by disqualification.

However, when the punishment continued after the bell, a second Sin Cara suddenly emerged, leaping into the ring to the same music and the same exact look! Staring each other down in the middle of the ring, the dual Sin Caras left the WWE Universe in a storm of uncertainly as to just what is going on and who is who.

With her fellow Diva of Doom Natalya in tow, Beth Phoenix – the No. 1 contender to the Divas Championship – absolutely dominated the self-professed “Geek Goddess” A.J. After the match, The Glamazon sent a powerful message to Divas Champion Kelly Kelly and the rest of WWE's “Cinderellas” “At Night of Champions,” she said, “the clock will strike midnight and the fairytale will be over.”

After escaping Wade Barrett's Wasteland, Sheamus blasted the English Superstar with the Brogue Kick, paving the road for Justin Gabriel to reign supreme with the 450 Splash. Following the match, The Celtic Warrior invited Christian back in the ring, but the former World Heavyweight Champion would not take the bait..

As Jinder Mahal screamed at The Great Khali in Punjabi from outside the ring, Heath Slater attempted to take advantage of the distraction. Though The Punjabi Nightmare regained the advantage, Mahal quickly joined the assault, giving Khali the win by disqualification. Ultimately, the gigantic Superstar overcame the double team, causing Mahal to flee before executing a crushing Punjabi Plunge on The One Man Southern Rock Band.

As they came to the ring, R-Truth and The Miz mocked both the WWE Universe and Toronto by performing a “remix” of Truth's rap song “What’s Up!” entitled “You Suck!” Then, with Miz and Kofi Kingston joining the SmackDown announce team, Truth overcame his opponent, avoiding Air Bourne before catching the high-flying opponent with a quick blow.

In the same week, both Truth and Miz beat the WWE Tag Team Champions in singles competition. Have they garnered enough momentum to dethrone Kingston & Bourne this Sunday at Night of Champions?

Through his assistant Zack Ryder, SmackDown General Manager Theodore Long made it clear to both World Heavyweight Champion Randy Orton and Mark Henry that there was to be “no contact” between them while appearing as special guests on “The Cutting Edge.” The SmackDown GM decreed that if there was any physicality, their World Heavyweight Championship Match at Night of Champions would be called off.

Returning to SmackDown in heroic style, the incomparable Edge questioned both Superstars about their ability to defeat each other this Sunday. While Henry insisted that 15 years of aggression was building up to the moment when the World Title would finally be his in just two days, Orton made it clear that after the pay-per-view was over, Henry would still be the “World’s Strongest Failure.”

10:24 As tensions reached a fever pitch, The Ultimate Opportunist reminded his guests about the SmackDown's GM “no contact” decree during his show. However, as he exited the ring, he declared “The Cutting Edge” to be officially over, lighting the fuse to Henry and Orton's extremely explosive physical confrontation.

As Orton and Henry began to unload on each other, Long sent out a sea of WWE Superstars to break them up. This did little good, as both WWE's Apex Predator and The World's Strongest Man broke loose in the bedlam and immediately reengaged each other. Henry eventually gained the advantage, throwing Superstars from the ring and crushing the World Heavyweight Champion with two massive splashes. Holding the World Title high above his head, the infuriated No. 1 contender prophesized what could very well be Randy Orton's fate at Night of Champions. 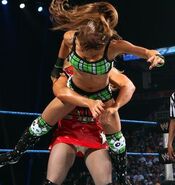 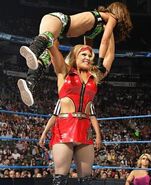 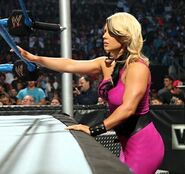 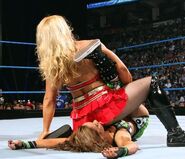 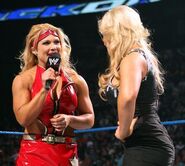 Retrieved from "https://prowrestling.fandom.com/wiki/September_16,_2011_Smackdown_results?oldid=1570221"
Community content is available under CC-BY-SA unless otherwise noted.