The September 13, 2001 Edition of Smackdown! was a televised Professional wrestling event by the WWF's Smackdown! brand, which took place on September 13, 2001 at the Compaq Center in Houston, Texas. This was the first public gathering after the terrorist attacks on New York, Virginia and Pennsylvania 2 days earlier. 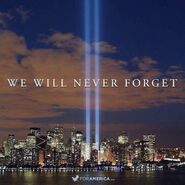 Retrieved from "https://prowrestling.fandom.com/wiki/September_13,_2001_Smackdown_results?oldid=1446009"
Community content is available under CC-BY-SA unless otherwise noted.