WWE Champion Alberto Del Rio is fond of referring to himself as “the greatest of the great,” but as everyone knows, actions speak louder than words. So when The Mexican Aristocrat began gushing about himself, yet again, WWE Hall of Famer Bret Hart decided to mercifully intervene. On behalf of his fellow Canadians, “Hit Man” informed Del Rio that a true champion fights his own battles and doesn't take advantage of an injured man. When Del Rio threatened Hart, his Night of Champions opponent, John Cena, thwarted his bravado. The moneyed Mexican then decided to arranged a match pitting Cena against ... Ricardo Rodriguez! The Cenation Commander-in-Chief then insisted Del Rio compete against Hart.

Not only that, later in the night, World Heavyweight Champion Randy Orton will also take on Intercontinental Champion Cody Rhodes and Triple H will face off one last volatile time with CM Punk before their No Disqualification Match at Night of Champion.

Vickie Guerrero has her hands full. In addition to United States Champion Dolph Ziggler, WWE's resident cougar has recently been eyeing Jack Swagger as a client as well. Unfortunately for her, the two don't play well with others. When they were teamed in a tag match against John Morrison & Alex Riley, the mistrust and jealousy was apparent. As they quarreled with each other, A-Ry & JoMo were quick to take advantage and nail down a win.

Later in the evening, an irate Vickie screeched as SmackDown General Manager Theodore Long informed her that Ziggler must defend his title in a Fatal 4-Way Match at Night of Champions against Swagger, Morrison and Riley.

The conspiracy continues – at least in the warped minds of R-Truth and The Miz. The two continued to vent about the supposed mistreatment they've received at the hands of WWE Chief Operating Officer Triple H just before Miz entered the ring to tackle WWE Tag Team Champion Kofi Kingston. With just six days until they and their respective partners square off at Night of Champions, The Cleveland Screamer and the leader of the Boom Squad hit the mat for an intense bout. As the other half of Air Boom, Evan Bourne, and his squirrely counterpart, Truth, looked on from ringside, Miz conquered Kofi when he hit the Skull Crushing Finale, putting the champions on notice for Sunday.

Since their defeat last week at the hands of Jerry “The King” Lawler & Zack Ryder, Michael McGillicutty & David Otunga have been eager for their rematch. That fervor turned to frustration after learning that Long Island Iced-Z could not compete thanks to Mark Henry, who rocked him on SmackDown. Instead, Lawler recruited someone less tan but a lot more intimidating: The Celtic Warrior. McGillicutty & Otunga were none too pleased when Sheamus emerged for the match – and with good reason. The ferocious Irishman dominated the former WWE Tag Team Champions, helping secure the win for himself and Lawler.

WWE Champion Alberto Del Rio may be gutless, but he's not senseless. As he and his personal ring announcer Ricardo Rodriguez faced off against John Cena & Bret Hart in a tag team match, The Mexican Aristocrat tucked tail and ran. Six days before facing Cena at Night of Champions, Del Rio tagged in Ricardo, who had entered the ring for his first-ever match, and scampered up the entrance ramp. Meanwhile, his hapless lackey suffered both an Attitude Adjustment and a painful Sharpshooter on his way to a team loss.

U.S. Champion Dolph Ziggler and Jack Swagger could use a timeout. The petulant pair clashed as Dolph stood at ringside to support manager Vickie Guerrero in her match against Divas Champion Kelly Kelly. Unfortunately for Vickie, Swagger ran down and smacked his blond rival, distracting WWE's resident cougar. As a result, the Divas Champion made easy work of her rival.

After the chaos cleared, Beth Phoenix marched to the ring and attempted to level an unsuspecting Kelly. The Divas Champion, however, nailed her Night of Champions adversary before she could attack.

World Heavyweight Champion Randy Orton has seen better days. The Viper entered into a rematch with Intercontinental Champion Cody Rhodes hoping to gain momentum going into Night of Champions. Instead, any drive Orton may have felt came to an alarming halt. As he battled Rhodes in the non-title match, his Night of Champions opponent, Mark Henry, pulled up a chair and watched from atop the entrance ramp. During the bout, though, The World's Strongest Man began an ominous walk toward the ring. As the frightening figure drew closer, Orton took his eyes off the Intercontinental Champion, who cracked him in the skull with his face mask, causing The Viper to flatten on the canvas.

After Rhodes’ victory, Henry stalked into the ring and drove the steel chair upon which he was sitting onto Orton's back. He then snatched the World Heavyweight Champion's title and held it aloft, vowing to capture it from Orton this Sunday.

He's one of the biggest movie stars on the planet, and next week Hugh Jackman will debut in one of his most exciting roles to date as special guest star on the WWE Raw Supershow. The star of the upcoming sci-fi action film Real Steel, Jackman will get the party started just one day after Night of Champions.

Technical difficulties, audio problems, microphone malfunctions. Whatever you call it, CM Punk couldn't seem to get a word in edgewise as he and Triple H engaged in a combustible verbal confrontation. The Second City Savior's microphone suddenly shorted out just as he was about to express something he'd been dying to say to The Game. The scenario was reminiscent of Punk's now famous diatribe against Triple H, Mr. McMahon and WWE when his mic also quit in the run up to SummerSlam.

09:55 A livid Punk cast his suspicions on WWE's Chief Operating Officer, who had a working microphone in his hand. After watching one mic go belly up, The Game offered The Second City Savior his mic. Just as he revved up his verbal engine, though – you guessed it – the second mic failed on him as well. Triple H summoned a third mic from ringside and handed it over. Punk, however, used it to clobber The King of Kings before leaving the ring. While WWE's COO seethed inside the square circle, his antiestablishment rival scowled back at him from the entrance ramp. The very personal animus between Punk and Triple H, who must resign as COO if he loses Sunday, is primed to blow in a No Disqualification Match at Night of Champions. 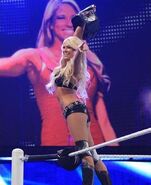 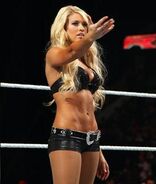 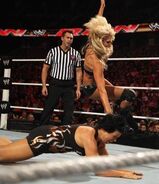 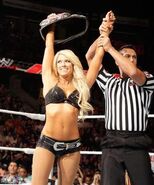 Retrieved from "https://prowrestling.fandom.com/wiki/September_12,_2011_Monday_Night_RAW_results?oldid=1570209"
Community content is available under CC-BY-SA unless otherwise noted.