The Undertaker’s return to Madison Square Garden was as chilling as it was destructive. Chilling for the WWE Universe who got to experience The Phenom’s jaw dropping entrance. Destructive for one Sami Zayn.

The Reaper arrived on the blue brand making it clear that he’s always considered MSG his home and then reflected on all the great legends and Superstars that have come through the halls of The World’s Most Famous Arena. However, before he could continue, The Deadman was interrupted by Sami Zayn, who insisted Undertaker was a legend who has sold out Madison Square Garden for 30 years. The Critic of Critics claimed to have nothing but respect for the legend, but he nevertheless openly questioned if The Undertaker should continue returning to MSG.

Zayn stated that the future was here, and his name was Sami Zayn. Undertaker didn’t say anything when Zayn asked him to leave the ring, but he spoke swiftly with action when he Chokeslammed Sami, taking yet another soul in the hallowed halls of the Garden.

Looking to pick up steam ahead of his Intercontinental Title Match against Shinsuke Nakamura this Sunday at WWE Clash of Champions, The Miz took on Andrade.

With Nakamura providing guest commentary but only speaking in Japanese, Miz was clearly looking to show out against his opposition. Andrade smothered Miz with a barrage of offense and tried to keep him grounded. However, rallied and chucked Andrade into Shinsuke at the commentary desk. Miz would then sift through all of Zelina Vega’s interference attempts and, in the critical moments, would avoid a dazzling series of moonsaults from Andrade and connect with the Skull-Crushing Finale for the win.

However, Miz would have literally no time to celebrate though as, right after the three-count, WWE’s Rockstar would blindside The A-Lister, connecting with a ring-rattling Kinshasa, sending a direct and brutal message ahead of their clash at Clash this Sunday.

Mandy Rose did not exactly ingratiate herself to Nikki Cross before this matchup started… in fact she straight up called her “ugly.” That proved to be far less than wise in the early goings, as Cross sprinted out of the gates (literally) and brought the fight right to Rose. God’s Greatest Creation would do her best to quell Nikki’s attack, but Alexa Bliss would neutralize Sonya Deville at ringside and Nikki would then catch God’s Greatest Creation with a picture-perfect rollup for the win.

Nikki & Alexa had gained the momentum heading into their title defense against Fire & Desire this Sunday at WWE Clash of Champions, but would tonight’s loss ignite a new spark for Mandy & Sonya heading into the weekend?

Otis & Tucker made easy work of a tandem of local competitors, absolutely demolishing them like a bulldozer would a worn-down building and finishing them off with a Compactor for the ages.

Erick Rowan arrived to SmackDown LIVE at Madison Square Garden with a clear message: That we didn’t know him at all. Rowan would suggest that we look him in the eyes and realize that he is a master manipulator.

Roman Reigns instead would just want to fight him. The Big Dog would dart out to meet Rowan and the two brutes went at it all throughout The World’s Most Famous Arena. Reigns would drop Erick with multiple Superman Punches, but Rowan would respond by grabbing a fan from the stands and powerbombing him into Reigns and the security personnel trying to break up the two Superstars. Rowan would then level everyone in sight, but The Big Dog would not stop in trying to get a measure of retaliation on Rowan. However, Erick would take it to another level by literally grabbing a roaming camera and flinging it right into Reigns.

As Rowan departed and Reigns rose to his feet, one question arose: What the heck would go down between these two when they collide this Sunday at WWE Clash of Champions?

Bayley’s new aggressive side would show itself early, with Bayley bringing the fight to Moon on the outside, just mere steps away from The Queen. The Shenom would never give in, but Bayley would prove to be too much, putting Ember away with a Belly to Bayley for the win. After the win, Flair would square right up to Bayley and the two would come eye-to-eye, each clearly believing they had the edge on Sunday.

WWE Champion Kofi Kingston would arrive to SmackDown LIVE at MSG reflective on the night in 2009 where Kingston battered Randy Orton from pillar to post in The World’s Most Famous Arena, a night that altered his career.

However, Kofi’s trip down memory lane would soon be interrupted with multiple chants of “stupid” from Orton. The Viper would then claim Kingston was nothing but a fraud, statements that had Kofi immediately ready to fight ahead of their WWE Clash of Champions slate this Sunday. The Apex Predator would trick Kofi though, having a steel chair concealed that he would immediately use to thrash Kingston near the iconic spot that Kingston bested him in the Garden a decade ago. The WWE Champion would battle back though, obtaining the chair that Orton brought into the equation and striking Randy multiple times with vigor. Kingston looked primed to repeat history and smash Orton through a table yet again in MSG. Kofi would finally keep Randy down with one final strike of the chair and then created a full-circle moment, driving The Viper through yet another table with a dazzling splash from the stands of MSG.

Advantage Kofi, at least for tonight.

With Elias having to withdraw from the King of the Ring Tournament due to injury, Shane McMahon promised to find a replacement for the crooning Superstar for his Semifinal Match against Chad Gable. And he did.

With Kevin Owens as the Special Guest Referee per Shane-O-Mac’s edict (promising to lift KO’s $100,000 fine if he called the contest “down the middle”), Gable would defeat “The Best in the World” in mere seconds with an astonishing rolling German Suplex. However, Shane wouldn’t take it, immediately vamping on the microphone that this matchup was now 2-out-of-3 Falls.

Shane would come at a deflated Gable with intensity, while KO was clearly distressed by Shane flexing his authority. Gable would continually battle through Shane’s obstacles and would appear to close in on victory several times, but with Owens worrying about Shane not lifting the fine, he would begin to make borderline questionable decisions as the official.

Gable found the way to eliminate all the variables though, catching Shane-O-Mac in an Ankle Lock, forcing Shane to tap out and advancing his way to the King of the Ring Tournament Final. Following the defeat, Shane would be absolutely incensed, blindsiding KO from behind and then firing the former Universal Champion in one of the most shocking moments in MSG history. 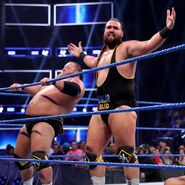 Roman Reigns and Erick Rowan threw down in a chaotic brawl 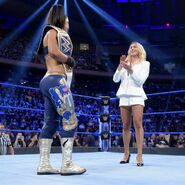 Retrieved from "https://prowrestling.fandom.com/wiki/September_10,_2019_Smackdown_results?oldid=1658607"
Community content is available under CC-BY-SA unless otherwise noted.