Saturday Night's Main Event XIV was a Television show produced by the World Wrestling Federation. It took place on December 7, 1987 at the Capital Centre in Landover, Maryland.

The episode was best known for the post-match events of the Hulk Hogan vs. King Kong Bundy matchup, which would serve as the catalyst for a Hogan-André the Giant rematch (from their WrestleMania III encounter), which would air on The Main Event a month later. Shortly after Hogan pinned Bundy (in what was Bundy's last appearance on U.S. television for more than six years), André came to the ring apron to challenge Hogan, but when Hogan accepted, André appeared to brush him off and began walking from the ring ... until he suddenly came back into the ring and attacked Hogan from behind, choking him down for more than two minutes. During the attack, the British Bulldogs came to the ring to try to aid Hogan but André knocked their heads together and threw them from the ring; an army of wrestlers -- Tito Santana, Rick Martel, the Junkyard Dog, Jake Roberts and "Hacksaw" Jim Duggan, all whom participated in non-televised matches earlier in the day at the arena -- then came to the ring but had no success pulling André away until Duggan used his 2-by-4 to hit André's behind, distracting him long enough to allow the others to pull Hogan from the ring to safety. Rather than come after Hogan to continue the attack, André stood in the ring with the WWF World Championship belt before finally leaving ringside. Afterward, André and Bobby Heenan demanded a rematch; at this point, Ted DiBiase's attempt to buy Hogan's WWE World Heavyweight Championship was not yet incorporated into the feud with André. 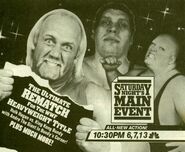 A poster/advertisement for this event. 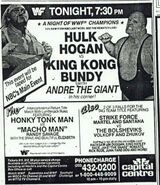 A poster/advertisement for this event.

Retrieved from "https://prowrestling.fandom.com/wiki/Saturday_Night%27s_Main_Event_XIV?oldid=1432934"
Community content is available under CC-BY-SA unless otherwise noted.