Royal Rumble at WWE.com
The 2022 Royal Rumble was the 35th annual Royal Rumble professional wrestling live event produced by WWE. It is held for wrestlers from the promotion's Raw and SmackDown brand divisions. The event aired on pay-per-view (PPV) worldwide and is available to stream through Peacock in the United States and the WWE Network internationally, which makes it the first Royal Rumble to air on Peacock. It took place on January 29, 2022, at The Dome at America's Center in St. Louis, Missouri.

As is tradition, the event feature a men's and women's Royal Rumble match, with both matches each featuring special guest entrants. Actor and stuntman Johnny Knoxville from Jackass will be in the men's match, while Impact Wrestling's Knockouts World Champion Mickie James will be in the women's match.

The match is based on the traditional battle royal match, in which 30 participants, aim at eliminating their competitors by tossing them over the top rope, with both feet touching the floor. The winner of the event is the last participant remaining after all others have been eliminated. The inaugural match in 1988 featured 20 entrants. At the 2011 Royal Rumble, for the first time 40 entrants were scheduled to compete; the most in the history of the event.

The Royal Rumble differs from a battle royal as the contestants do not enter the ring at the same time but instead are assigned entry numbers, usually via lottery, although they can win guaranteed, desirable spots via a number of other means, the most common being winning a match. This usually takes place before the Rumble begins. The match begins with the two participants who have drawn entry numbers one and two, with the remaining competitors entering the ring at regular timed intervals, either ninety seconds or two minutes, according to their entry number. These peculiarities are credited to Pat Patterson.

The match has no stipulations or rules other than that elimination must occur by a participant being placed over the top rope and both feet touching the floor. If they have any other part of the body touching they are out as well. A wrestler who exits the ring without going over the top rope is not eliminated from the contest. For example, during the 1999 Rumble match, both Vince McMahon and Steve Austin left the ring, only to return later in the match. Elimination is also valid if brought about by an external force (such as a non-participant or a previously eliminated participant). For instance, in 2006, Shawn Michaels was eliminated from the match by Shane McMahon, who was never admitted in the match and simply was interfering to eliminate Michaels. It also happened in the 1998 match match when Triple H and Chyna worked together to eliminate Owen Hart. In the 1994 match, the last two participants Bret Hart and Lex Luger were declared co-winners when it was decided that both of their feet touched the floor at exactly the same time. A similar situation occurred in the 2005 match, however the match was restarted after Batista and John Cena eliminated each other at the same time. Batista eliminated Cena afterwards to win the match. Though various referees are charged with observing the match, some eliminations have remained unnoticed with the eliminated participant sneaking back into the ring to continue. For example, Stone Cold Steve Austin was eliminated this way during the 1997 event but re-entered and eventually won the match.

The Rumble winner may also put his championship opportunity on the line in a match, if he chooses. This was first done in 1999, when Stone Cold Steve Austin offered to forfeit his title opportunity to the Big Boss Man, who won third place in the Rumble (Austin was actually the runner-up in that rumble, but the winner - Vince McMahon himself - had voluntarily given up his title opportunity) if Vince McMahon could beat him in a cage match at St. Valentine's Day Massacre: In Your House, which Austin would go on to win. The second time that this happened was in 2006, when Randy Orton goaded Rey Mysterio into putting his main event spot at WrestleMania 22 on the line at No Way Out, which Orton would go on to win. Mysterio was eventually reinserted into the main event at WrestleMania and went on to win the World Championship match.

With the brand extension introduced in mid-2002, the 30 entrants from 2003 to 2006 consisted of 15 wrestlers from both the Raw and SmackDown brands. At first, the winner of the match received a shot at their brand's champion. Starting in 2004, the Rumble winner had the option of challenging any brand's champion. For instance, Chris Benoit switched brands in 2004 and won the World Heavyweight Championship. From 2007 to 2010, participants from the ECW brand competed along with the Raw and SmackDown brands, while the ECW World Championship became available for the winner to challenge for regardless of their designated brand. During ECW's participation, the entries for each brand were not evenly divided.

The first Royal Rumble took place on January 24, 1988 in Hamilton, Ontario. Jim Duggan won, and the first pay-per-view Rumble occurred a year later. Pat Patterson has been credited with "inventing" the match.

The Royal Rumble is comprised of 30 men; beginning with two men in the ring, and at regular timed intervals (usually, but not always, every 90 seconds), one of the remaining 28 wrestlers enters the ring. Participants must eliminate all other opponents and the winner of the event is the last wrestler remaining after all others have been eliminated. Referees are situated at each side of the ring to validate eliminations.

A wrestler is eliminated when leaving the ring over the top rope, and then having both feet touch the floor (although this latter specification was not specified until the 1995 Royal Rumble, where the "both feet" stipulation played a crucial role in the final moments of the match). Going out between the second and third rope or under the bottom rope is not a valid elimination. A referee must witness an elimination in order for it to be valid (in 2000, X-Pac was eliminated by The Rock but since it was not seen by any of the referees, X-Pac re-entered the ring and continued the match until he was officially eliminated by The Big Show).

An elimination can also occur when a wrestler is thrown off the top rope by a non-competing opponent, or by one who had already been eliminated, or when the participant deliberately jumps over the top rope, outside the ring. In other words, if a wrestler goes over the top rope, regardless how it happened, that wrestler is out. Other wrestlers can be de facto eliminated due to interference preventing the wrestler from entering the ring (examples being Spike Dudley in 2004 and Scotty 2 Hotty in 2005).

Since the 1993 event, the winner has officially been given the chance to challenge the WWE Champion at WrestleMania. The stipulation stemmed from 1992, when the Royal Rumble decided who would win the then-vacant WWF Championship (Ric Flair won the match).

In the 2016 Rumble, the WWE World Heavyweight Championship was defended, when then-champion Roman Reigns, as the #1 entrant, put his title on the line against 29 other competitors. Triple H won the match and thus the championship after entering the match at the coveted #30 spot. It was Triple H's second Rumble victory of his career.

With the brand extension introduced in mid-2002, the 30 entrants from 2003 to 2006 consisted of 15 wrestlers from the RAW brand and 15 from the SmackDown! brand. This makes it therefore, one of the few pay-per-view events (and certain combined non-televised shows held around WrestleMania time) with inter-brand competition on a regular basis. The official declaration for the first post-brand extension event in 2003, was that the Rumble winner faced their brand's champion at WrestleMania, but starting in 2004, due to a supposed "loophole" in the Rumble's stipulations, the Rumble winner has the option of challenging either brand's champion (Chris Benoit switched brands in 2004 and won the World Heavyweight Championship, which was the basis for a storyline the following year when Batista won the Rumble, but ultimately remained on RAW).

The 2007 Royal Rumble marked the first year participants from the 2006-established ECW brand competed along with the RAW and SmackDown! brands. Unlike previous years where each brand got an even split of wrestlers, the 2007 Rumble featured 13 wrestlers from RAW, 10 from SmackDown! and 7 from ECW. The winner of the Royal Rumble now also has the option to challenge for the ECW World Championship.

2 The match was originally Roman Reigns vs. Brock Lesnar for the WWE World Heavyweight Championship at WrestleMania XXXI but Seth Rollins cashed in his Money in the Bank contract while the match was still in progress and it turned into a Triple Threat Match.

WWE released a complete DVD box set of every Royal Rumble event in its entirety (in similar fashion to the WrestleMania Anthology released in 2005). Note that the 1988-1999 events had never been released on DVD in North America (All except the 1999 event were released as Tagged Classics in UK). Royal Rumble: The Complete Anthology was released on March 13, 2007. 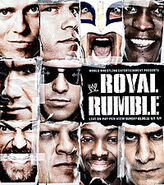 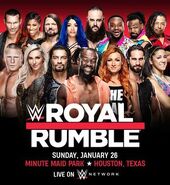 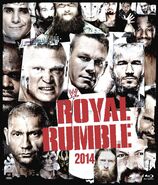 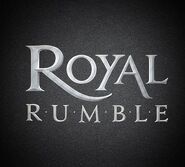