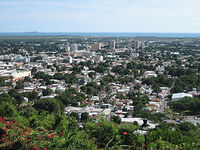 Ponce is both a city and a municipality in the southern part of Puerto Rico. The city is the seat of the municipal government.

Ponce, Puerto Rico's most populated city outside the San Juan metropolitan area, is named for Juan Ponce de León y Loayza, the great-grandson of Spanish conquistador Juan Ponce de León. Ponce is often referred to as La Perla del Sur (The Pearl of the South), La Ciudad Señorial (The Noble, or Lordly, City), and La Ciudad de las Quenepas (Genip City). The city serves as the governmental seat of the autonomous municipality as well as the regional hub for various Government of Puerto Rico entities, such as the Judiciary of Puerto Rico. It is also the regional center for various other commonwealth and federal government agencies.

Retrieved from "https://prowrestling.fandom.com/wiki/Ponce,_Puerto_Rico?oldid=360688"
Community content is available under CC-BY-SA unless otherwise noted.