The October 7, 2011 Edition of Smackdown is a Professional wrestling television show of the WWE's Smackdown brand, which took place on October 4, 2011 at the Mississippi Coast Coliseum in Biloxi, Mississippi.

The night started with a group of Superstars explaining why they walked out on Raw, citing an unsafe work environment. David Otunga went as far as saying they are also prepared to walk out of SmackDown, unless Triple H steps down from running day-to-day operations. The last to speak for the group was Del Rio, who said he inspired everyone to walk out on Raw. The WWE Champion then declared that none of them will appear on Raw again until Triple H steps down from running Raw, and that he's eager to compete on SmackDown. Hearing enough, Teddy Long emerged and ended all the talk by announcing two matches for the night: the tag team main event, as well as Del Rio vs. Sin Cara.

After earning the right to be called Sin Cara at WWE Hell in a Cell, The Mexican Sensation tangled with fellow Mexican Superstar, WWE Champion Alberto Del Rio for the first time ever. Despite a valiant effort, Sin Cara “Azul” was forced to tap out to Del Rio's cross armbreaker. After the match, Sin Cara “Negro” charged to the ring and attacked Sin Cara “Azul,” leaving him writhing in pain after a leap from the top rope. Despite what went down at WWE Hell in a Cell, clearly there is unfinished business between the two masked Superstars.

Michael Cole said he walked on Raw about because Triple H's ego has been out of control and he hasn't been listening to people's grievances. On the other hand, Booker T said he is neutral about the situation and only walked out on Raw because he needed to use the bathroom.

In an interview with Matt Striker, WWE Tag Team Champions Kofi Kingston and Evan Bourne spoke about the Raw walkout. Although they felt things might not entirely be Triple H's fault – until he steps down from running Raw – Air Boom declared they will only be appearing on SmackDown.

As the WWE Tag Team Champions approached the ring, they were viciously attacked from behind by Jack Swagger and Dolph Ziggler. When the match eventually got started, Kingston came out swinging with an emotional offense. However, the champions never seemed to be able to recover from the initial assault. In the end, Swagger planted Bourne into the canvas with the Gutwrench Powerbomb for the win. Afterward, Vickie Guerrero came to the ring to help celebrate the victory.

In a decisive and impressive victory, newly crowned Divas Champion Beth Phoenix made quick work of Alicia Fox, trouncing the smaller Diva with the Glam Slam. Afterward, Natalya locked Fox in a painful submission hold, while Phoenix forced her to cry out in pain over the mic.

After making an emotional comeback in front of the WWE Universe, Big Show threatened to repeatedly punch Mark Henry in the head and take the World Heavyweight Championship from him. After Show called Henry out, the champion obliged and emerged at the top of the ramp to say he'll let Show know when and if he gets a match with Henry. Furious, The World's Largest Athlete retorted by saying he'd put Henry through the announce table and break his ankle with a steel chair if he didn't get the answer he wanted by the end of the night.

In an interview with Matt Striker, Randy Orton said he won't beg like Christian for one more World Title match. “If I have to tear through the entire SmackDown roster in order to have another championship match, then I’m all for it,” he said. And not willing to lump himself in with the other Superstars who participated in the Raw walkout, The Viper said “If I have a problem with Triple H, I’ll deal with Triple H personally.”

Former Intercontinental Champion Ezekiel Jackson absolutely manhandled Jinder Mahal. After brutally slamming Mahal to the canvas four consecutive times, Jackson made him tap out after a painful session in the Torture Rack.

In a meeting with Teddy Long, WWE EVP John Laurinaitis expressed his support for Long and explained the importance of what happens on Friday nights. “If you lose control of SmackDown like Triple H lost control of Raw, the entire WWE Universe is going to be in turmoil,” he said.

After making his return, Hornswoggle convinced Booker T to get in the ring and do a Spin-a-Roonie for the WWE Universe.

The powerhouse duo of Randy Orton and Sheamus proved too much to handle for Christian and Cody Rhodes. After The Celtic Warrior worked over Rhodes pretty good, he tossed Christian from the ring. Next, The Viper took over and dispatched of Rhodes with a debilitating RKO for the win.

After Mark Henry sidelined Big Show for four months by fracturing his leg in a steel chair, Show returned ... and he was pissed! After his demand for a World Title Match was denied by Henry, The World's Largest Athlete went berserk, charged to the ring and unloaded on Henry with massive punches. Even a slew of WWE security personnel could not stop the onslaught.

After pushing his way through security in the ring, Show viciously speared Henry, then brutalized an entire ring full of security. When Henry tried to walk off with his title during the melee, The World's Largest Athlete chased him down.

At first it looked as if Henry was going to win the fight when he slammed Show into the ringside barrier. But The World's Largest Athlete battled back and chokeslammed the champion through the announce table in a dramatic show of strength.

With Henry dazed and vulnerable, Show was prepared to inflict exactly the same punishment that Henry used to put him out of commission. With the champion's leg entangled in a steel chair, Show was ready leap on top of him from the steel ring steps. But just in the nick of time, Henry was spared when GM Teddy Long emerged to calm the angry giant by agreeing to give him what he wanted – a World Championship Match – as long as he did not leap on Henry. Show heeded the GM's orders, but still blasted The World's Strongest Man in the back with a steel chair for good measure. When will we see these two titans clash? 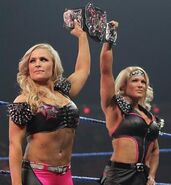 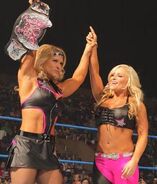 Retrieved from "https://prowrestling.fandom.com/wiki/October_7,_2011_Smackdown_results?oldid=1564234"
Community content is available under CC-BY-SA unless otherwise noted.