After SmackDown LIVE General Manager Daniel Bryan was viciously chokeslammed by Kane on Raw last night, Shane McMahon addressed his returning sister Stephanie McMahon, Kurt Angle and the entire Raw brand to kick off SmackDown LIVE. The SmackDown Commissioner blamed his sister equally as much for the attack on Bryan as Kane or Angle. In response to Stephanie's bombshell announcement from last night that Angle would be the captain of Team Raw at Survivor Series, Shane-O-Mac named himself the captain of Team SmackDown!

With a ticket to Team SmackDown at Survivor Series on the line and their personal rivalry reaching its breaking point, Dolph Ziggler and Bobby Roode squared off in a high-stakes 2-out-of-3 Falls Match.

The two Superstars dazzled in an incredible contest that was equal parts athletically impressive as it was brutally physical. The first fall went to Ziggler after he connected squarely with a picture-perfect superkick. However, Roode fired back, grabbing the second fall with a clutch rollup after Ziggler's head banged off the ring post. In crunch time, Roode gained the glory, defeating The Showoff after countering a rollup into a Glorious DDT to join Team Blue's side at Survivor Series.

After the contest, Roode spoke with Renee Young and made it clear that Team Raw would be going down at Survivor Series.

Baron Corbin suffered his second straight non-title loss to Sin Cara after executing a savage attack last week that resulted in a disqualification, and Sin Cara demanded a rematch to seek retaliation on The Lone Wolf.

Corbin dominated most the contest and continually tried to pry the mask off of Sin Cara's face. The Lone Wolf's shocking display of disrespect enraged the luchador, who lunged at Corbin and beat him down in a seemingly blind rage.

The Lone Wolf attempted to get away from Sin Cara several times during the beating, but the masked man would not relent, leaving the official no choice but to disqualify him as they brawled around ringside. However, the loss would do nothing to deter Sin Cara from continuing the beatdown until Corbin was finally able to jump the barricade and escape ... at least for now.

After AJ Styles defeated Sunil Singh last week on SmackDown LIVE, WWE Champion Jinder Mahal's other “advocate” Samir Singh was now the one eager to defend his leader's honor by taking on The Phenomenal One here on Team Blue. First, however, Mahal took center stage to yet again address his opponent at Survivor Series, Raw's Universal Champion, Brock Lesnar.

The Modern Day Maharaja insisted he was not afraid of The Beast and planned on beating, victimizing and conquering Lesnar on the one night a year when Raw and SmackDown Superstars compete. However, before Mahal got too deep into speaking to his people in Punjabi, he was interrupted by Styles, who was clearly ready to compete.

The Phenomenal One made quick work of Samir, nearly driving him through the canvas with a devastating Styles Clash to pick up the win in near-record time.

Mahal would get the last, though, relentlessly beating down Styles after his big win, punctuating the assault by twice dropping his nemesis with the Khallas and making a statement to both The Phenomenal One and Brock Lesnar.

Earlier in the night, the beef between The New Day and Rusev & Aiden English continued when The Bulgarian Brute disrespectfully dumped all the Halloween candy The New Day offered him to the ground. Filled with intense rage after such a heinous and careless act, Big E challenged Rusev to a one-on-one contest.

The two maulers had an absolute slugfest, but all bedlam broke loose when English began to sing his signature “Rusev Day” song while perched on the announce desk. Xavier Woods combatted English's blissful bars by sounding Francesca II right in his face. This prompted English to attack Woods, and then, with Kofi Kingston on his trail, The Drama King entered the ring, which prompted Big E to take him out with a ring-shaking Big Ending. However, with Big E momentarily distracted by The Drama King, Rusev took advantage, striking the back of Big E's head with a punishing kick for the 1-2-3.

With the fourth spot on SmackDown's Survivor Series team on the line, Shinsuke Nakamura and Kevin Owens squared off under the bright lights of Tuesday night's main event.

After some astounding back-and-forth action, it seemed KO had a massive advantage when Sami Zayn made his way to ringside, but WWE's Rockstar refused to stay down despite a vicious attack from Owens, even kicking out after KO landed a massive frog splash. When KO instructed Zayn to get the announce table ready to attack Nakamura, the duo's plans were immediately thwarted by Randy Orton, who rushed out of the crowd and dropped Zayn with a massive suplex onto the table instead. This opening allowed The King of Strong Style to prevail from the hellacious battle with a stinging Kinshasa to earn his way onto Team SmackDown at Survivor Series. 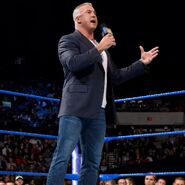 Retrieved from "https://prowrestling.fandom.com/wiki/October_31,_2017_Smackdown_results?oldid=1564092"
Community content is available under CC-BY-SA unless otherwise noted.