Finally, The Rock has come back to Survivor Series! Seven days after John Cena invited The Great One to team with him against The Miz & R-Truth at the same event where Rock made his WWE debut, The People's Champion appeared via satellite to accept the Cenation leader's offer. Admitting that an outpouring of support from the WWE Universe helped sway his decision, The Brahma Bull revealed that he's ready to whoop The "Awesome Truth" on Nov. 20. And with that, the most charismatic tag team in WWE history is born.

If that wasn't enough, it was announced that The Great One will return to WWE Raw SuperShow on Nov. 14 for a live three-hour special when Raw gets Rocked!

In a bout set by Interim Raw General Manager John Laurinaitis on WWE.com, CM Punk had to defeat The World's Strongest Man if he wanted to face Alberto Del Rio for the WWE Title at Survivor Series.

It was a massive undertaking, but one The Straight Edge Superstar was more than willing to accept. That was until Del Rio's flunky, Ricardo Rodriguez, hit the ring and jumped on Henry's back, leading the official to award the bout to the World Heavyweight Champion via disqualification. Clearly, The Mexican Aristocrat wants nothing to do with Punk.

Leave it to Vickie Guerrero to ruin a good time. As soon as Kermit the Frog and Miss Piggy had a chance to meet the WWE Universe, the talking animals were interrupted by a cougar. Getting into an oinking match with Miss Piggy while Jack Swagger threatened Kermie, Vickie was finally silenced by Santino Marella who revealed that he will face The All-American American tonight while Zack Ryder locks up with United States Champion Dolph Ziggler.

Not to be overshadowed by The Muppets, the gorgeous Divas slipped into their sexiest Halloween costumes and rumbled in a Battle Royal to determine who would be the next competitor to challenge Beth Phoenix for the Divas Championship.

Showing how determined these women are to capture that title, every Diva fought hard, but the brawl came down to Eve, Alicia Fox, Kelly Kelly and Natalya. Putting partnerships aside, the four Divas collided in the ring, but when the smoke cleared, Eve was the only one standing.

Ever notice how much Sheamus looks like Beaker from The Muppets? It turns out it's not just a passing resemblance. When The Celtic Warrior stopped Christian from bothering Beaker and Bunsen as they prepped their latest science experiment, he gave his puppet doppelganger a knowing nod before adding, “I’m afraid I can’t make it to the family reunion this year.”

Wade Barrett continued to breathe new life into his career tonight as he teamed with the sinister Intercontinental Champion Cody Rhodes to defeat the WWE Tag Team Champions. Not content just to claim the victory, the SmackDown villains laid waste to Evan Bourne and Kofi Kingston after the bell with some help from the underhanded Christian. The trio's beating may have caused some serious damage if it wasn't for the last minute heroism of a very aggressive Sheamus.

It looks like Alberto Del Rio will be defending his WWE Title against CM Punk after all. After being knocked out cold by Big Show's mighty fist, The Mexican Aristocrat awoke to find himself in the wrenching agony of The Straight Edge Superstar's Anaconda Vise.

With no choice but to agree to Punk's demands for a WWE Title Match at Survivor Series or risk having his arm broken, Del Rio consented and the bout became official. Now that's what you call hostile negotiations.

We’re not sure if it was the furry body or the strange accent, but something gave Santino Marella a serious kinship with The Muppets. With Kermit the Frog and Miss Piggy watching from the entrance ramp and Animal sitting in as special guest timekeeper, the Italian Superstar scored a big victory over The All-American American when Beaker slipped Santino a mysterious potion, which The Milan Miracle used to blind Swagger and grab the win.

Moments after his associate Jack Swagger was defeated by Santino Marella thanks to a little help from The Muppets, Dolph Ziggler suffered a similar fate when he was beaten by Zack Ryder. Luckily for the United States Champion, his title wasn't on the line, but he'll think twice before he messes with Gonzo again.

If there's one thing Michael Cole is good at, it's beating a dead horse. After daring Jim Ross to face him in a “Michael Cole Challenge” last week, the sniveling announcer revealed that the competition will have to wait until Nov 14, because J.R. was out of action with inflammatory bowel disease. Let's just hope Good Ol’ J.R. shows up to shut this worm's mouth once and for all.

Hornswoggle sure picked a bad time to meet The Muppets. The little leprechaun is such a huge fan of the colorful puppets that he has nearly the whole group tattooed on his ankle, so he should have known better than to interrupt Miss Piggy in the presence of a handsome man. Ruining the moody porker's chances with the abdominally inclined John Morrison, Hornswoggle stole a kiss from the pig and ended up getting nailed with a karate chop he won't

Fired up after finding out that The Rock will team with him against The “Awesome Truth” at Survivor Series, John Cena gave The Awesome One a little taste of what to expect on Nov. 20. Smashing The Miz in the same city where they clashed at WrestleMania XXVII, the Cenation leader was almost stopped by a fan dressed as Ghostface from the Scream movies. As it turned out the attacker was actually R-Truth who got a taste of Cena's rage before the West Newbury, Mass., native put Miz away with the STF. The powerful Superstar then nailed Truth with an Attitude Adjustment to make it one unhappy Halloween for The "Awesome Truth." 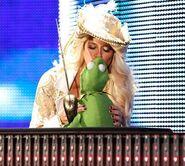 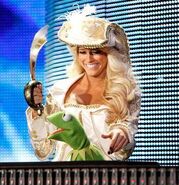 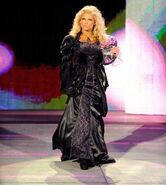 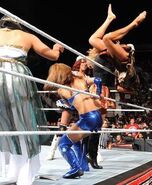 Retrieved from "https://prowrestling.fandom.com/wiki/October_31,_2011_Monday_Night_RAW_results?oldid=1564088"
Community content is available under CC-BY-SA unless otherwise noted.