The October 3, 2016 Edition of RAW is a Professional wrestling television show of the WWE's RAW brand, which took place on October 3, 2016 at Staples Center in Los Angeles, California.

They say behind every great man is a great woman. And we have known for some time that Lana is the mastermind behind Rusev's dominance. So it was no surprise that The Ravishing Russian took some family business into her own hands on Raw by demanding Roman Reigns give The Super Athlete a United States Title rematch off the heels of last week's chaotic non-conclusion.

His swagger rediscovered since capturing the title, Reigns all but blew Lana off, leading to an admonishment of “Go to hell” from The Ravishing Russian. Then came Rusev to punctuate the exchange, kicking Reigns into the WWE Universe and laying hands on his title. After recovering and laying Rusev out with a Superman Punch, the battered Reigns changed his tune, telling Rusev he'd give him the promised rematch on one condition: It be inside Hell in a Cell.

That old salty sea dog Brian Kendrick may have some wind in his sails yet. The resident buccaneer of the Raw-exclusive Cruiserweight division made a towering statement Monday night, knocking off T.J. Perkins in Monday's opening contest. Mercifully for Perkins, the bout was non-title and the WWE Cruiserweight Championship will stay with him, but the sting of Kendrick's defeated will likely linger for a good long while as well.

Perkins, to his credit, came out swinging, blasting Kendrick with a dropkick after “The Wizard of Odd” delivered a sardonic opening handshake, but Kendrick literally used every inch of the ring to his advantage, trapping Perkins’ fingers in the hinge of the ring posts. TJP was never the same after that. Even after Perkins kicked out of Sliced Bread No. 2, the resilient Kendrick raked Perkins’ eyes to soften him up for a Captain's Hook that earned him the tapout win.

BRAAAAAUUUUUNNNNN!!! Big man Braun Strowman returned to action on Raw, and having disposed of the pesky Sin Cara in his last rampage, he was free to massacre whatever enterprising local competitor attempted to try their hand at the man-mountain this week. This one, an Idaho transplant named Chase Silver, was looking for a Hollywood-caliber debut, but anyone could see this plot twist coming a mile away: unmitigated carnage, shoulder tackle that sent Silver into next week, and the inevitable 1-2-3. There was, however, one key difference between this and Strowman's other victories — he spoke. “The Gift of Destruction” demanded that Raw General Manager Mick Foley present him some real competition next week ... or there might not be a next week.

Seth Rollins had a few things to say in a scathing sit-down interview with Michael Cole. He blamed Stephanie McMahon (again) for pulling the strings on Kevin Owens’ WWE Universal Championship victory, mentioned he wanted a WWE Universal Title rematch and vowed to cancel “The Kevin Owens Show,” to name a few. Owens had a counter-proposal of his own: His “best friend” Chris Jericho should step in as the special guest referee if Rollins get a title rematch.

Jericho, enterprising legend that he is, even went one better. He proposed the BFFs challenge The New Day, thereby potentially earning them an opportunity at the Raw Tag Team Title should they win. Owens seemed somewhat tentative, but after New Day came out to poke the bear a little bit and accept the challenge, The Prizefighter came around to a Jeri-KO reunion against the Power of Positivity. And as Jericho pointed out, why shouldn't Owens be on board? It's not like Jericho was going to challenge him for the WWE Universal Title or anything ...

It's been a while since we’ve seen Titus O’Neil, and now we know why: The Big Deal was off revamping his entire image, and now, “The Titus Brand” has made its big Raw debut in a match against Sami Zayn. Unfortunately, he didn't quite #MakeItaWin. Even though O’Neil unleashed a newfound aggression that nearly made quick work of The Underdog from the Underground, Zayn muscled his way into an exploder suplex and blasted O’Neil with the Helluva Kick to, well, #MakeItaWin.

Even though they fell short of the Raw Tag Team Titles twice last week, there's no denying that Luke Gallows & Karl Anderson's brutality still means they're among the top teams to beat in Raw's tandem division. They said as much in a backstage interview, labeling the Raw Tag Team division as full of “clowns” who fall perfectly in line behind the fun-loving New Day as their champion.

If Gallows & Anderson arguably fell victim to their more humorous tendencies before, they certainly have shaken that impulse and are back to smashing heads. This week, The Golden Truth felt the brunt of their attack, and it didn't even matter who was the legal man. Not only did R-Truth suffer the fateful Magic Killer, but Goldust, who had been tossed from the ring mid-match, also took one for good measure.

Usually, Enzo Amore & Big Cass are guaranteed to entertain the WWE Universe even in the most dire of scenarios. But this week, The Realest Guys in the Room got real and introduced a series of breast cancer survivors, all of whom won a contest back in May, to the WWE Universe to celebrate WWE's fifth straight year of partnering with Susan G. Komen. Presenting each survivor — Gina Foreman, Kelly Sherman and Angelica Frey — with a Raw Women's Championship, Enzo & Cass proclaimed them as “a cuppa’ winners” and the WWE Universe showered them with an ovation fit for the champions they are.

Well, it's safe to say Chris Jericho did not see this one coming. He figured he'd team up with Kevin Owens, beat The New Day to earn a Raw Tag Team Title Match, and all would be well. Instead, he found himself abandoned by the WWE Universal Champion, defeated by New Day, Pedigreed by Seth Rollins and clowned from commentary by “The Ranch” stars Ashton Kutcher and Danny Masterson. Drink it in, man.

That's too bad, considering it was going swimmingly for Jeri-KO for a while. Facing Xavier Woods (who made The List of Jericho twice in one night and subbed for a stitched-up Kofi Kingston) and Big E, the self-proclaimed best friends were firing on all cylinders. At least, until Seth Rollins appeared atop the ring and Woods nailed KO with an enzuigiri. A reeling Owens tagged Jericho and, once Woods was trapped in the Walls of Jericho, Rollins distracted The Ayatollah of Rock ’n’ Rolla, allowing New Day to pounce with the Midnight Hour. Owens, for his part, barely even waited for the bell to hit the road, and didn't interfere when Rollins nailed Jericho with a Pedigree. Some friend he is.

Of all the Cruiserweights, it seems like the WWE Universe has taken especially to Rich Swann. Tony Nese, on the other hand, felt shunted to the side despite an impressive debut last week on Raw. Well, The Premier Athlete rectified that in a big way, dispatching Swann with aplomb in a Cruiserweight match that seemed to be another Swann showcase for a good long while. Once Nese started peppering Swann's torso with knees, the tune of the dance changed dramatically and Swann was unable to regain ground. Nese slowly chopped away at his opponent, and after smothering Swann with a bodylock, he snuffed out Swann's final rally with a modified, pump-handle Michinoku Driver.

As evidenced by Sheamus’ Twitter poll — wherein he floated team names such as Harambe McHarambeface and Fighty McFightface — he's still not entirely sold on his new tag team with Cesaro. That's OK. Neither is The Swiss Superman. But they looked good, again, in tag team action against another team of local competitors en route to their eventual Raw Tag Team Title Match. They found their stride earlier, displaying some solid (if reluctant) teamwork.

Despite some passive-aggressive tagging in, they ultimately finished off the locals, Raul White & Mark Carradine, to earn their second win when Cesaro literally leaped off Sheamus’ back to stop an interference, setting up the final Brogue Kick. We know they hate each other and all, but if they keep this up you might just call them Champy McChampface.

How fitting that Raw's in the City of Angels tonight, because Sasha Banks has pulled off the miracle. The embattled Boss made good on the promise she laid down after injuring her back at SummerSlam by defeateding Charlotte in Raw's main event, earning herself a second reign as Raw Women's Champion.

Sasha had a little unexpected help, given that Bayley got the better of a backstage fight with Dana Brooke, forcing “The Queen” to go to battle on her own. But The Boss, as she did before, proved she's got Charlotte's number one-on-one. The champion employed a sound strategy — target Banks’ back and do not stop — but Sasha scratched, clawed and would not be denied. A slam on the apron couldn't put her down. A big boot or two couldn't put her down. A corkscrew moonsault to the outside couldn't put her down. And as Charlotte slowly slipped into desperation and hysterics, Sasha struck, using a hurricanrana to transition into a Bank Statement, then re-rolling Charlotte's reversal into a second Statement for the tapout. And make no mistake: It certainly was a statement. 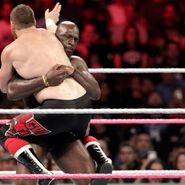 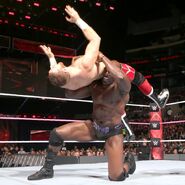 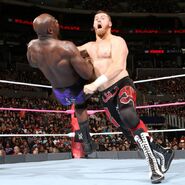 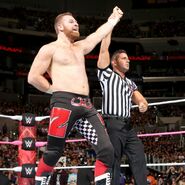 The New Day vs. Jeri-KO

Retrieved from "https://prowrestling.fandom.com/wiki/October_3,_2016_Monday_Night_RAW_results?oldid=1564074"
Community content is available under CC-BY-SA unless otherwise noted.