November 2, 2016
The October 26, 2016 Edition of NXT is a Professional wrestling television show of the WWE, which took place at the Full Sail University in Winter Park, Florida on October 13, 2016.

The first round of the 2016 Dusty Rhodes Tag Team Classic wrapped up this week with two big bouts. The WWE Network broadcast kicked off with the first of those, featuring #DIY taking on the duo of CWC participant HoHo Lun and WWE's first Chinese signee, Tian Bing.

Lun & Bing showed great fire in bringing the fight to their opponents, but the experienced duo of Johnny Gargano & Tommaso Ciampa neutralized Bing and clocked Lun with their superkick/running knee strike combination to get the win. #DIY advances to the second round of the Dusty Classic, where they will square off with longtime rivals and NXT Tag Team Champions The Revival.

One week after putting Liv Morgan and the NXT Women's division on notice, Billie Kay looked to make her and Peyton Royce's message crystal clear this week against Aliyah. Kay seemed to be on her way to accomplishing that, until Morgan arrived on the scene to get a little payback on Royce.

The distraction allowed Aliyah to roll up Kay and earn the victory. After the bell, Morgan went right after Kay, but soon found herself fighting a two-on-one battle. Aliyah returned to even the odds, but Kay and Royce got the upper hand, overpowering the two and leaving them in a heap on the canvas.

With his TakeOver: Toronto showdown with Bobby Roode looming, Tye Dillinger looked to tune up for the huge battle against Noah Potjes. The Perfect 10 looked focused as he picked Potjes apart, getting the three-count after connecting with the Tye-Breaker.

However, Dillinger's celebration would be short-lived. In the middle of a post-match interview with Mike Rome, The Glorious One ambushed Dillinger from behind, planting The Perfect 10 face-first into the entrance ramp with an implant DDT. Roode made sure to let Dillinger and the NXT Universe know that they can expect more of the same in Toronto.

Seeing the NXT Women's division as her personal playground, NXT Women's Champion Asuka took to the ring this week and toyed with Thea Trinidad, letting the newcomer get a few shots in before steamrolling over her. After forcing Trinidad to tap out with a Fujiwara armbar, NXT General Manager William Regal arrived with a message for The Empress of Tomorrow from her TakeOver: Toronto opponent, the returning Mickie James.

James warned that though Asuka may have defeated everyone in her path, she hasn't faced anyone like her. The former Women's Champion and Divas Champion warned that an “international incident” was going down in Toronto, which brought a smile to The Empress of Tomorrow's face.

Though he is just days away from a title defense against Brian Kendrick at Hell in a Cell, WWE Cruiserweight Champion TJ Perkins was laser-focused on doing his part to ensure he and Kota Ibushi advanced in the Dusty Rhodes Tag Team Classic. But standing in their way was the daredevil duo of Lince Dorado & Mustafa Ali.

The two teams were at a stalemate at first, with Dorado & Ali taking flight to gain the upper hand. The two high-flyers worked over the Cruiserweight Champion, but the resilient Perkins could not be kept down and eventually tagged in The Golden Star. Ibushi clobbered both of his opponents with a flurry of devastating kicks, setting off a total melee. In the end, Perkins emerged with the advantage, forcing Ali to tap out to his trademark kneebar. The WWE Cruiserweight Champion and Ibushi may have been dabbing in celebration after the match, but there won't be any time for dancing when the Dusty Classic's Second Round begins, as they face the chaotic crew known as SAnitY. 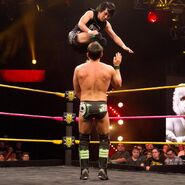 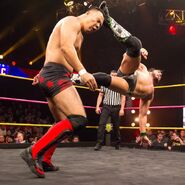 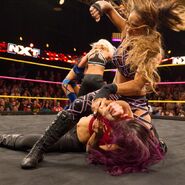 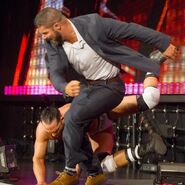 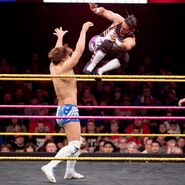 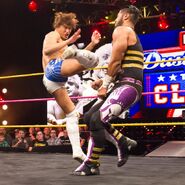