The October 25, 2004 Edition of RAW is a Professional wrestling television show of the WWE's RAW brand, which took place on October 25, 2004 at the Veterans Memorial Auditorium in Des Moines, Iowa.

An Orton victory would guarantee the youngster a shot at Triple H's World Heavyweight Championship at Survivor Series. But a Flair win would make Orton permanently ineligible to ever challenge the The Game again as long as he was champion. Orton accepted the extreme conditions and was poised to beat Flair for the second time in six days. But with the referee distracted by the presence of Batista, Chris Jericho, Chris Benoit and Maven outside the ring, The Game swooped in and delivered a massive chair shot to Orton's back. Moments later, Flair crawled on top of Orton for the victory. Orton and the rest of the RAW roster would get some swift retribution before the program closed.

On a night where RAW General Manager Eric Bischoff, fresh off his Taboo Tuesday haircut, took the night off and let the “inmates run the asylum,” Evolution took it upon themselves to run the show. Their power trip didn't go over so well with the other Superstars, who surrounded Flair and Triple H after the main event, as The Game was then pummeled by Jericho, Benoit and Orton in the middle of the ring.

In his first match as Intercontinental Champion, Shelton Benjamin defeated Jericho. In another Taboo Tuesday rematch, Benjamin reversed the Walls of Jericho into a cradle to retain the championship.

Meanwhile, Shawn Michaels, just three days removed from knee surgery, came to the ring on crutches to thank the fans for making Taboo Tuesday possible. He also promised to return stronger than ever.

Edge, still feeling a bit jilted by the fans after not getting a shot at Triple H last Tuesday, wasn't sure when he was going to return. Edge, who appeared via satellite in an interview, told WWE fans he has been taken for granted.

Gene Snitsky continued his recent rampage. With Kane out of action due to injuries suffered at Taboo Tuesday at the hands of the ruthless newcomer, William Regal felt Snitsky's wrath, losing a match that lasted barley a minute. 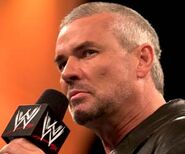 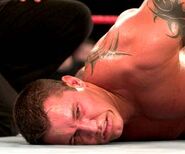 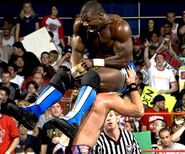 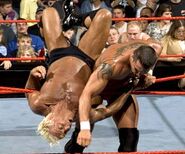 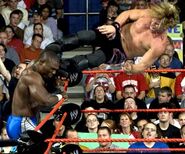 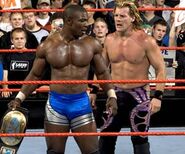 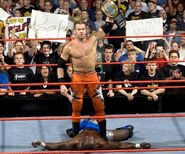 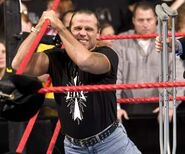 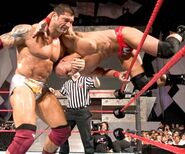 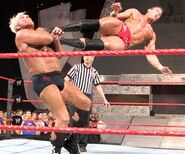 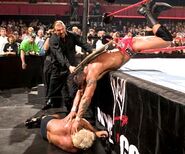 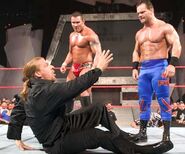 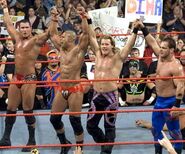 Retrieved from "https://prowrestling.fandom.com/wiki/October_25,_2004_Monday_Night_RAW_results?oldid=1564045"
Community content is available under CC-BY-SA unless otherwise noted.