Raw kicked off Monday with the heist of the century, as Chris Jericho stormed to the ring and demanded the return of his precious “List of Jericho,” which had been pickpocketed by an unknown Superstar. Jericho refused to compete until the List was returned, and even Kevin Owens and Raw Commissioner Stephanie McMahon couldn't bring Jericho down to earth when they attempted to calm the six-time World Champion in advance of his and Owens' Triple Threat main event against Seth Rollins.

Speaking of Rollins, he quickly revealed himself to be the culprit, and he used his ill-gotten glimpse into Jericho's mind to devastating effect, revealing that both Stephanie and Owens’ names were on the List in an attempt to sow discord among Jeri-KO before the Triple Threat. Rollins then revealed his alterations to the list, consisting mainly of the various body parts he was planning to rip from Kevin Owens inside Hell in a Cell this Sunday. And then, as a kicker, he told Jericho that if he wanted the List back so bad, he'd have to come and get ... it.

It's been a rough couple of weeks for Karl Anderson here. After he and Luke Gallows jumped Enzo Amore & Big Cass, the world-traveled bruiser has ended up on the wrong end of singles matches with both certified G's, with Enzo himself getting the win this time around. Gallows & Anderson put Enzo & Cass on their heels initially by paying off a good brother in the production truck to cut Enzo & Cass’ mic-skis during their intro, but The Realest Guys in the Room rallied twice over. They lead the WWE Universe in a recitation of their mantra before Enzo upended Anderson in the bout itself.

And yes, Big Cass gave his buddy a hand, or more to the point, a boot, kicking Anderson in the face when the referee was distracted by Gallows, which left him easy prey for Enzo. So congrats to Enzo & Cass for preying on one-half of their Hell in a Cell opponents. But add Gallows into the equation on Sunday and it's a whole new ballgame.

Cesaro and Sheamus were passive-aggressively impressive as a tag team for two weeks before mixing it up with individual members of The New Day, at which point their Mick Foley–mandated union seemed to veer sharply off the tracks. But The King of Swing and Celtic Warrior seem to find a way to win when they're in the ring together. They did so at the expense of New Day themselves in a non-title warm up to their Hell in a Cell match for the Raw Tag Team Championship.

Not only did they win, but they also seemed — for the first time — to be a true unit, employing a variation on the Unicorn Stampede by battering Kofi Kingston with a revolving door of European uppercuts. Ironically Sheamus, whom New Day had tried to “shame” both before and during the match, provided the difference, tagging in during a key moment to throw off New Day's chemistry. After Cesaro disposed of an airborne Kingston with a devastating European uppercut outside the ring, the Irishman blasted Big E with the Brogue Kick to win.

You can't skip arm day if you're gonna give all those hugs. Bayley showed off some impressive power against Dana Brooke in an arm-wrestling contest that should have been an easy way for Brooke to prove her dominance over Bayley last week wasn't an upset. Bayley's injured right arm proved to be easy pickings for Brooke, but when she appeared to be overpowering Brooke with her left arm, Dana cold-cocked Bayley and slammed her already-weakened arm across the arm-wrestling table. But Bayley retaliated by gutting out a Bayley-to-Belly that sent Dana rolling out of the ring.

Curtis Axel Bo-lived for a hot second. But after Bo Dallas beat down his onetime best friend on Raw last week, the former Intercontinental Champion came to his hometown with new gear, a new attitude, and a desire to honor the legacies of his grandfather and father by beating up Dallas. The Ax Man swarmed Dallas early on and even nailed a Perfect Plex for a two-count, riding his hometown momentum and a chant of “SKOL!” to a sizable advantage. But Axel flew a little too off the handle in his enthusiasm, and Dallas capitalized by rolling The Ax Man up for three.

Thanks to Titus O’Neil, The Shining Stars lost out on a Six-Man Tag Team Match and an investment last week when The Golden Truth & Mark Henry thwarted their Rolex scam. This week, The Big Deal cost Primo & Epico again, which was shocking since he wasn't even part of their bout against Golden Truth, but backing up The Shining Stars at ringside. In fact, the Stars were firmly in the driver's seat when O’Neil started mixing it up with Henry, who was serving as Truth's muscle, outside the ring. Henry shoved O’Neil into the ropes, knocking a perched Primo off the top turnbuckle and allowing Golden Truth to get the pin.

Hell in a Cell may boast the rare distinction of a Triple Main Event, but only one of those marquee matches — Sasha Banks and Charlotte Flair for the Raw Women's Title — has the smell of history about it. As the first women to ever battle inside the Cell, pressure is on the two Horsewomen to deliver. Raw General Manager Mick Foley took his opportunity to warn the two Superstars about the dangers that await them inside Hell in a Cell — dangers they might not fully appreciate just yet.

If Sasha was relaxed in the face of history, however, give credit to Charlotte, who was raring to go from the second Sasha walked in the ring. Charlotte demanded Foley give her the contract at the top of her lungs and vowed to beat respect into the “second-rate talent” holding her title. Sasha was calm, cool and collected in her response, and even though Foley all but begged the women not to sign away years of their life unless they were truly ready to lose them, sign they did. Next stop: Hell in a Cell.

Brian Kendrick was already on his last chance. Now he's got an uphill climb to boot. The No. 1 contender to the WWE Cruiserweight Title needed a momentum boost going into his Hell in a Cell battle against TJ Perkins, but instead, he got a major setback at the hands of Rich Swann. Despite Kendrick emptying the entirety of his bag of tricks, Swann slid out of the Captain's Hook and rolled Kendrick up for the pinfall. With Kendrick reeling, he resorted to the unthinkable backstage by tearfully asking Perkins to take a dive for him so he could keep his career going and continue to provide for his family.

Sami Zayn — brave, brave Sami Zayn — stepped up to Braun Strowman last week when the big man demanded some true competition. The Gift of Destruction, as it turned out, was not as impressed with Zayn as he initially seemed to be. When Zayn took the ring for their planned match, Strowman ignored him entirely, demanding Mick Foley present him some real competition. Harsh. Still, Zayn would not be denied, attacking Strowman when the mountainous Superstar didn't show him proper respect. He at least got Strowman's attention, in the form of a slap to the face and a kick to the head. But Strowman got the better of the exchange when he snatched Zayn out of midair and threw him into the barricade before leaving in disgust. Still, Zayn remained defiant, returning to his feet and demanding Strowman to throw down even as “The Abominable Strowman” departed the stage.

So Goldberg, as we learned last week, is down for a fight if it's a fight Brock Lesnar wants. The only thing left for the WWE Universe to wonder is what The Beast Incarnate thought about being “last” on the former World Heavyweight Champion's hit list. The answer? Well, he and Paul Heyman are none too thrilled that the WWE Universe has thrown its support behind Goldberg as his collision course with The Conqueror begins. Though Heyman tried to sway the crowd in Lesnar's favor, the WWE Universe didn't quite seem to be entirely on the side of The Beast Incarnate. Hmmm ....

Try though he did, Seth Rollins wasn't able to tear Kevin Owens and Chris Jericho apart before the main event Triple Threat Match by stealing the “List of Jericho.” But he did one better and defeated both of them at the same time. Initially, things had been going swimmingly for the two best friends, who ganged up and teed off on the helpless Rollins. The Architect found himself set up on the top rope for a double-superplex, but Rollins simply slipped down the turnbuckle, executed a textbook double-powerbomb of Jericho and Owens, and defeated them both to the mat simultaneously.

He paid dearly for the feat, though, as Jeri-KO mugged The Architect after the match and threw him shoulder-first into the steel steps. Once Jericho had departed the stage and Owens was left atop the ramp by himself, Rollins struck back, fighting through security to initiate a brawl with the WWE Universal Champion. He paid dearly for that, too, as Owens seized control of Rollins and executed his patented apron powerbomb. Hell in a Cell awaits, and for all his bravado, Rollins goes into the match with a distinct disadvantage: Unlike Mick Foley in 1998, he's already broken in half. 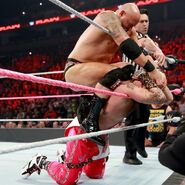 Cesaro & Sheamus vs. The New Day

The Golden Truth vs. The Shining Stars

Retrieved from "https://prowrestling.fandom.com/wiki/October_24,_2016_Monday_Night_RAW_results?oldid=1564039"
Community content is available under CC-BY-SA unless otherwise noted.