The October 21, 2011 Edition of Smackdown is a Professional wrestling television show of the WWE's Smackdown brand, which took place on October 16, 2011 at the Palacio de los Deportes in Mexico City, Mexico.

Returning home to Mexico with the WWE Championship in his grasp, Alberto Del Rio promised to successfully defend his title against John Cena in a Last Man Standing Match this Sunday at Vengeance. However, when The Mexican Aristocrat insisted that an altercation with Cena on Raw had left him too injured to face his scheduled SmackDown opponent Big Show, GM Theodore Long suggested he was just too scared to take on The World's Largest Athlete.

After an incensed Del Rio claimed he would put the giant in his cross armbreaker and make him tap out, Teddy Long asked the Mexican members of the WWE Universe if the match should go on as planned. When the crowd responded with a resounding applause, the main event was set in stone.

Despite an incredible athletic effort by John Morrison, Mark Henry reigned supreme over The Prince of Parkour with the World's Strongest Slam. Will his uncontrollable rage allow him to conquer the colossal Big Show at Vengeance and return him to the Hall of Pain?

Insisting that his past alliances with “a legion of parasites” had been of no benefit to him, Wade Barrett proclaimed that “The Great Barrett Uprising” would begin with his match against Daniel Bryan. In the culmination of the intense showdown, the determined English Superstar caught Mr. Money in the Bank in mid-air as he came off the second rope, finishing him with the devastating Wasteland.

Although Dolph Ziggler will compete in the WWE Tag Team Championship Match this Sunday, Teddy Long informed Vickie Guerrero that he will also be defending the United States Title against Zack Ryder on the same night.

When Sheamus hit Dolph Ziggler with the earth-shattering Brogue Kick – earning the tag team victory for him and Zack Ryder – he sent Christian a definitive message about what his opponent is in for this Sunday at Vengeance. However, as the victorious Great White made his way up the ramp, his pay-per-view opponent blindsided him with a surprise spear, sending a message of his own.

In recent weeks, Cody Rhodes humiliated Randy Orton by placing a paper bag on his head and cost The Viper the World Heavyweight Title. This week, Rhodes explained that his harsh feelings toward his Vengeance opponent went far beyond the vicious attack he suffered on the Sept. 23 edition of SmackDown. He said that his actions as of late had allowed a demon to be exorcised, one born of contamination from “The Viper’s venom” back when they stood side-by-side in The Legacy.

When called out by the resentful champion, Orton informed him that his attack with the timekeeper's bell several weeks ago will be nothing compared to the anguish he will unleash on Rhodes this Sunday. But, when WWE's Apex Predator tried to give him a painful preview, he was suddenly thwarted by Rhodes’ advancing baggers. Though the Intercontinental Champion would live to fight another day, The Viper stomped one of his assistants into the steel ring steps, before delivering the RKO to the other.

After Sin Cara (Negro) was forced to tap to Sin Cara's (Azul) excruciating tilt-a-whirl armbreaker, the special stipulation of their Mask vs. Mask Match called for him to remove his sacred cover! When he refused to do so, the victorious Sin Cara reengaged him and ripped the mask off his head, revealing his face to the WWE Universe.

Just two days before she will attempt to dethrone Divas Champion Beth Phoenix at Vengeance, Eve made it clear to both The Glamazon and Natalya that she is not a Barbie doll and that there is nothing they can do to break her. When “The Sisters of Salvation” continued to mock her, the gutsy Diva embarrassed The Fabulous Firebird by pushing her to the canvas.

After escaping Alberto Del Rio's cross armbreaker, Big Show looked ready to finish off The Mexican Aristocrat with the chokeslam. Before he could, however, the disruptive Ricardo Rodriguez flew towards the giant from the top rope, bringing about the disqualification.

The World's Largest Athlete responded by delivering the WMD to the impulsive ring announcer – as well as to his reeling hometown opponent. The carnage didn't stop there. When World Heavyweight Champion Mark Henry emerged and charged his gigantic No. 1 contender, Big Show hit The World's Strongest Champion with his third WMD of the night, sending him crashing to the canvas with incredible force.

What will happen when Big Show challenges Henry for the World Title this Sunday at Vengeance? 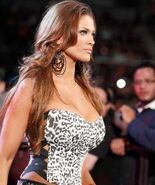 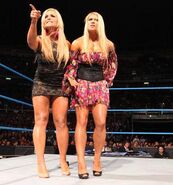 Retrieved from "https://prowrestling.fandom.com/wiki/October_21,_2011_Smackdown_results?oldid=1563964"
Community content is available under CC-BY-SA unless otherwise noted.